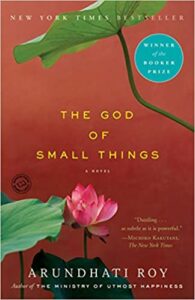 Arundhati Roy’s debut novel, The God of Small Things, the winner of the Booker Prize in 1997 is a modern-day classic. Her powerful message about family, class and caste led to comparisons with William Faulkner, her acute observation of society told with understated emotion reminded readers of Charles Dickens, and her inexplicably poetical and magical words of Salman Rushdie and Gabriel Garcia Marquez. It is a simple story set against the backdrop of social discrimination, communism and the caste system revolving around the lives of the twins Rahel and Esthappen (Estha), the children of Ammu Ipe who grew up in 1960s in Ayemenem in a Keralite Syrian Christian family. The seven year old twins are not concerned with the big things but anticipate the arrival of their nine year old English cousin Sophie Mol, the daughter of their uncle Chacko. It is this event that lies at the heart of the novel and leads to circumstances that change the course of the small lives of Ayemenem.

The novel opens with a thirty year old Rahel returning to her house in Ayemenem to meet her brother Estha and she recalls the story of her life tracing events before and after the arrival of Sophie Mol. Roy makes powerful observations about the communist movement, the injustices of caste discrimination, gender inequality, colonialism, religion and politics. The readers get a view of the lives of a family trying to make sense of these situations, their community and their purpose. All the relationships are realistically captured as the readers come to know the story of Chacko and his ex wife Margaret, the early love disillusionments of Baby Kochamma, the twins’ grand aunt, and the life of Pappachi, the twins’ grandfather. This book is a piece of art as it captures complexities of life through the eyes of children as their worlds collide with the adults. The novel in rich in colour and imagery which transports its readers to Ayemenem in May: ‘’The river shrinks and black crows gorge on bright mangoes in still, dust green trees. Red bananas ripen. Jackfruits burst.” The metaphors and poetic language fills heroes of filth, poverty and loss as Roy writes: “Filth had laid siege to the Ayemenem house like a medieval army advancing on an enemy castle.”

Roy constantly contrasts between the small and big things to emphasise the small lives of Ayemenem and their inconsequential existence compared to the big things around them like the power of authority, poverty, socio economic conditions, unfair and rigid conventions, and the weight of history. The characters find delight in small things such as television which they can control and which make them feel their significance. These small things are not only objects of happiness but symbols of familial and social disintegration such as the rotten and abandoned ‘Paradise Pickles Preserves’ signboard which represents the decline of the family’s ambitions. Apart from these small things the instrument of this small and big allusion is Velutha, an outcast and doomed carpenter with simple friendships and small delights such as fishing nets. The novel revolves around memory as a theme with the childhood trauma of the twins which haunts them to the present day. Roy brings out this haunting trauma as she describes Estha: ‘’A fisherman in a white tiled bathroom, with sea-secrets in his eyes.” The words left unsaid and words not forgotten repeat throughout the book to show the disintegration of its characters. The lack of ambition in Estha and lack of direction in Rahel, the family’s trip to the cinema, Estha’s meeting with the ‘Orangedrink Lemondrink’ man all these instances are parts of the narrative style that sometimes rushes and sometimes slow down just the memory which picks up random pieces and tries joining them together.

The concept of subtlety and uncovering hidden meanings in the novel’s ‘landmarks’-‘the river’, ‘the boat’, ‘the temple’ and ‘the History House’ lead to the terror. The subconscious truths, the horrors, and depths are to be found beneath the appearances. The ordinary sentences like:”at the police station, Inspector Thomas Mathew sent for two Coca-Colas. With straws” are filled with foreboding and the sense of the terror. Roy’s experimentation with the book’s structure, timeline and language but her eccentric approach makes it magical. The stylistic technique of repeating certain words and phrases is entwined with the non linear narrative that builds the suspense of the tragedy making it more intriguing and enticing. Sentences like: ‘’Not old. Not young. But a viable die-able age’’ depict the strong connection of the story with the language. The language too focuses on small sentences like the small things of the plot and repeats certain words like the memories which repeat in the minds of the characters. It is only towards the end that the readers realise the trauma and horror of the novel like the twins when they grow up. The book is melancholic and honest with its depiction of characters that are like the people around us. This thought provoking and unputdownable book is powerful in every way. It is a deep and emotionally complex narrative of the small lives of Ayemenem. The themes of melancholy, memory, loss, love and hope make it a timelessly beautiful masterpiece for all generations.