Book review: No good man among the living 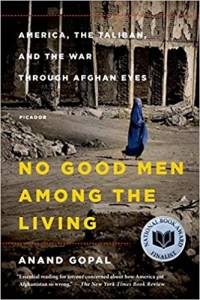 Since 2001, many Americans are now questioning whether it was a mistake to send our troops to Afghanistan. Almost 16 years after the September 11 attacks on the twin towers in New York City , we are conflicted about what we are doing in Afghanistan. Americans are getting tired of the war that is still dragging on. Gopal, a correspondent for the Wall Street Journal and the Christian Science Monitor, spent four years traveling throughout Afghanistan. Bearded, dressed as a native and speaking like one, he heard stories from fighters, tribal elders, young boys and government officials that challenged his ideas about the war and how we fought it.

in his first book, “No Good Men Among the Living: America, the Taliban, and the War Through Afghan Eyes”, author Anand Gopal elaborates how devastating it has been and how the government bungled the war on terror. Our leaders ignored the attempts made by the Taliban leaders to surrender, instead backed a corrupt Afghan regime.

From a Pashtun proverb: “There are no good men among the living, and no bad ones among the dead”, Gopal suggests there are no heroes or villains in Afghanistan. Today’s ally can be tomorrow’s enemy; it is difficult to take sides in that country. Americans failed to realize this and instead took sides as if things were black and white.

Placing present Afghanistan in the perspective, Gopal describes the civil war that followed the withdrawal of the Soviet troops in 1989. The Taliban emerged in 1994 who disbanded warring militias and imposed a regime of harsh Islamic law, and the regrouping of the militias in 1996 as the Northern Alliance, which continued to fight the Taliban for the next five years.

Acclaimed journalist Anand Gopal goes into great details about the lives of three Afghans caught in America’s war on terror. One, a Taliban commander, Mullah Cable who rises from scrawny teenager to a leading insurgent. Second, a US-backed warlord, Jan Mohammed who uses the American military to gain personal wealth and power. Third, a village housewife Heela trapped between the two sides, who discovers the devastating cost of neutrality. All were the members of the largest tribal group, the Pashtuns. Mullah Cable, whose given name is Akbar Gul, retreated to Pakistan as the Taliban fell. He later returned, renounced the gun and opened a phone-repair shop. But his peaceful stint as a civilian didn’t last. Upset with the corruption of the local police and the continuing presence of the Americans, Akbar Gul rejoined the Taliban.

American contracts with local power brokers have created a new class of warlords whose militias are known as private security companies. What will happen, Gopal wonders, when the Americans leave and the money dries up?

One important aspect of the book covered the process how the Afghans were picked up by the Americans and shipped to Guantanamo or Bagram. A distinguished tribal elder Dr. Hafizullah, the first governor of Zurmat, a long time anti-Taliban leader who came to prominence during the anti-Russian jihad had been imprisoned during the Taliban rule. While apprehending a key American ally Abdullah Mujahid, he ended up in Guantanamo. Mujahid reported to the authorities that Hafizullah was a double agent working for Taliban.

Gopal cites; none of these people were members of either Taliban or al-Qaeda and yet they were shipped to Guantanamo. As a result of a bureaucratic inefficiency, only a handful of prisoners in Guantanamo would be Taliban member of any import. One inmate was accused of supporting a political organization of Ahmed Shah Masoud, a pro-western Northern Alliance leader killed by alQaeda. Another was alleged to be a member of Herakat-i-Inqilabi – an anti-Soviet Mujahedeen group, backed by the United States that has been defunct since 1990. Inmate Mohammed Nasim arrived Guantanamo accused for working as a deputy to Rashid Dostum, a pro-US warlord and former Gelam Jam militia leader, who prison authorities mistakenly believed has ‘defected to the Taliban in 1998”, or so Nasim’s classified file stated.

Years later, Hafizullah and Commander Naim were transferred to Afghan government custody then to be released after intense tribal pressure. But one night in 2009, the Americans again came for Hafizullah and led him away in hood and locked away in Bagram, where he still remains.

Upon release from Guantanamo, Sabar Lal was forced to relocate from Pech to Jalalabad due to threat from the Taliban. He spoke to Gopal ruefully about the years he lost to Guantanamo’s island cage and vowed to stay away from public life altogether. Late one night in 2011, US soldiers stormed his house and dragged him from his bedroom. What happened next is unclear. The night watchman and relatives say that he was blindfolded and executed. Afterward, a spokesman for the coalition announced that “a key affiliate of the alQaeda network” had been killed.

Gopal writes about numerous cases where one Afghan reported another to the American forces and got them into trouble. The accused were arrested with made up charges, blindfolded, handcuffed, stripped naked in the open so the people could see. They were variously tortured, taken from one base to another and many of them ended up in Guantanamo prison.

Gopal shows that the Afghan war, so often regarded as a hopeless quagmire, could in fact have gone very differently if we accepted the surrender of the top Taliban leaders immediately after  the US invasion and if the Taliban were made a part of the process and submitting to the new government. Almost the Taliban ceased to exist at that time―yet the Americans were unwilling to accept such a turnaround. Instead, driven by false intelligence from their allies and an unyielding mandate to fight terrorism, American forces continued to press the conflict, resurrecting the insurgency that persists to this day.

Regarding expenses of the war, Gopal suggests of the $ 557 billion that the United States spent in Afghanistan, only 5.4% went into development or governance. The rest was spent mainly on military expenses with a significant portion channeled to the coffers of the warlords. Afghan government was one of the highly corrupted in the world and thus ineffective in fighting the warlords.

Gopal writes, US claims of 8 million children going to school was a phantom figure. In one province, investigators found 80% of the 740 schools were not functioning at all. The teachers were staying home and collecting their salaries. The claims of 85% Afghans having access to healthcare in the post-Taliban era appear to be misleading. Actually 85% of the districts had one health center which, ordinary Afghans could not access due to distance or security issues. In Gopal’s narrative, it was a “Potemkin Country, built only for show”, where in the name of reconstruction, everything was deception.

Gopal says, the true winners of the war were the warlords and not the Afghans nor the Americans. In the beginning of 2011, series of mysterious assassinations killed one strongman after the other including Ahmed Wali Karzai, President Karzai’s brother. It was comparable to the Godfather story with no Don Corleone standing at the end.

Gopal appears to hold the West, the government and the warlords accountable for recent brutalities. Americans did not kill civilians deliberately – unlike the Taliban who used brutal methods to shoot innocent women and children at point-blank range. The book did not elaborate on the role of Pakistan in the Taliban resurgence and letting Taliban off too easy.