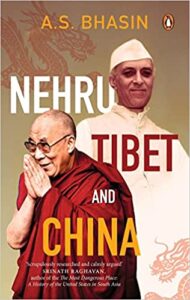 Nehru, Tibet and China, Author A.S. Bhasin, Penguin Random House India, 2021, Hardcover, 403 pages, $22.95, ISBN: 9780670094134.
By Arnold Zeitlin       23 May 2022
Prime Minister Jawaharlal Nehru’s reputation as a moralistic, visionary stateman takes a hit from author A.S. Bhasin in his account of the events leading up to India’s disastrous border war with China in 1962. According to Bhasin, when it comes to China and Tibet, Nehru was naive,  dithered, had hallucinations, was self-delusional, docile and overawed by China and, finally, was no far-sighted stateman.
In conclusion, Bhasin writes Nehru looked towards China “as a partner in his quest for peace and to achieve Asian solidarity. He was willing to sacrifice India’s core interests even when China was not reciprocating….The more assertive China became, the more yielding he became…Quite often China’s behavior was not only aggressive, but demeaning….he neither achieved peace nor Asian solidarity”.
The failure to settle India’s northern border with China in Nehru’s lifetime has resulted in a seeping wound that today figures behind the often-bloody clashes in the high Himalayas and Karakorums between the forces of two nuclear-armed Asian giants.
In contrast to Bhasin’s dismal portrait of Nehru is his positive image of China’s premier, Zhou Enlai, repeatedly offering to concede the British-drawn McMahon line along the eastern stretch of the border although he regarded it as illegal. Zhou traveled to New Delhi in April 1960 for six days of fruitless border talks with Nehru. Right up to the outbreak of war Zhou was seen in Bhasin’s account as moderate, almost pleading. However, the author hints that the real power behind Zhou’s stance was China’s paramount leader, Mao Zedong who allowed at the same time the Chinese news media duplicitly to vilify India and Nehru in particular.
Bhasin writes with the authority of 30 years with the historical division of India’s Ministry of External Affairs, which he eventually headed, and as the editor of five volumes about India-China relations from which his account mainly has been drawn.
Bhasin sticks to the history and diplomacy leading up to the war, providing few details of the 1962 fighting, although he mentions India’s military weakness against China’s forces, including the threat of Indian’s chief of army staff at the time to resign because his assessment of India’s weaknesses was rejected by Defense Minister Khrishna Menon.  “India’s defense establishment under Khrishna Menon at this time,” Bhasin writes, ” appeared to be in disarray. Nehru’s confidence in his defense minister did not inspire a corresponding confidence in the armed forces”.
Bhasin writes of Nehru, despite his diplomatic posture of non-alignment and reduced to humiliation, pleading with U.S. President John F. Kennedy to send India fighter planes and bombers crewed by Americans to join the war with China. That never happened, of course, although the United States and United Kingdon sent huge amounts of military supplies to bolster Indian forces. The author leaves details of the fighting to journalist Neville Maxwell’s 70-year-old classic India’s China War. He also leaves to Maxwell the revelation of the Henderson Brooks-Bhagat Report by a commission which after the fighting sharply criticized the Indian hjgh command. Although Maxwell leaked its details, it has been classified secret ever since. Bhasin pleads that the Indian public needs to be educated by opening all secret files, not only the report, about the events leading to the 1962 conflict, the conflict itself and what has happened since.
“To untangle the Gordian knot that India-China relations have become the people of India need to know what actually went wrong,” he writes, adding in his final sentence:
“Nothing would be lost that already has been lost by the opening of the archives. Truth must prevail. Can the government accept the challenge and bite the bullet?”
Bhasin reaches back to the 18th century to provide the necessary background to understand the later episodes that have led to conflict. The problem became India’s at independence in 1947 when it inherited from its colonial masters a border with Tibet, a land that the British hoped in the 19th century would serve as a buffer to an expansionist Tsarist Russia. Instead, Indian confronted an expansionist China. India had close cultural, religious and trade ties with Tibet,  the status of that land cloudy as it teetered between claiming either to be an independence state or appealing for autonomy. China essentially settled the issue by sending troops to occupy Tibet in 1950 and repeatedly demanding India stay out of what was now China’s internal affair.
According to Bhasin, China was willing to settle its border with India by agreeing to recognize the MacMahon Line that the British drew as a border with Tibet. In return, Zhou wanted India to negotiate the border with a desolate, resource-less but disputed 16,000-foot high, 15,000 square-mile region known as Aksai Chin northeast of Kashmir. Nehru several times noted that not a blade of grass grew there and that, in fact, India had no access to the mountainous region. But Aksai Chin had strategic value for China because it connected western Tibet and Xinjing province. In the 1950s, the Chinese build a 750-mile connector road that the Indians, for all their claim to rule the area, didn’t notice while under construction for seven years until it was completed in 1957, a circumstance Bhasin labels “a mystery”.
Nehru could never bring himself to negotiate finally that border; his face-to-face talks with Zhou in 1960 ended in a stalemate. China not only controls Aksai Chin now, it claims the Indian state of Arunachal Pradesh south of the MacMahon Line on the basis that it once was part of southern Tibet. The border issue festers to this day. Bhasin’s account helps the reader understand why.