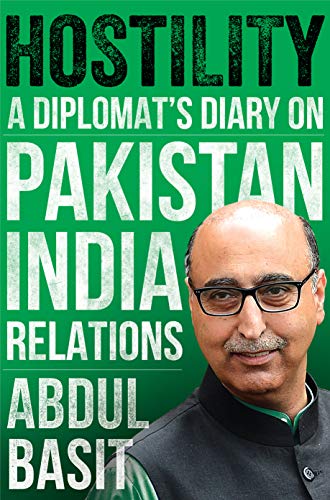 India has had a history of border disputes with its neighbours. The most prominent and ever existing is the Kashmir dispute with Pakistan. The departure of the British from the Indian subcontinent left behind this most talked about South Asian border dispute.

The 74 year old territorial dispute over the Kashmir region between the two nuclear armed South Asian neighbours is the rationale for two major Indo-Pakistan wars. Both the states have witnessed numerous military standoffs since independence and have been engaged in strenuous negotiations. The relationship between the two states could have been on a path of stability. However, in the year 2014 Prime Minister Modi came to power and India’s Pakistan policy went through a series of amendments.

Abdul Basit’s book Hostility- A Diplomat’s diary on Pakistan India Relations takes us through his journey as Pakistan high commissioner to India from the year 2014 to 2017.

Ambassador Basit currently is the President of the Pakistan Institute for Conflict and Security Studies, Islamabad. He was also the Pakistan ambassador to Germany during the years 2012 to 2014. Basit is the most popular as well as the least liked high commissioner of Pakistan to India, apparently in both the countries, as his book suggests. Coincidentally, after his appointment as the high commissioner, India- Pakistan relationship started deteriorating, and the situation has worsened ever since. The book is an elucidation of one of the most complex bilateral diplomacy in the world. Conducting diplomacy between India and Pakistan amid all the chaos is similar to trying to extend a hand of friendship to an enemy whilst trying to punch them in the face with the other.

The first chapter of the book is Basit narrating the dramatic chain of events that led him from Berlin to New Delhi. Basit was offered the position of foreign secretary by the then Prime Minister Nawaz Sharif but later on refused and sent to New Delhi as High Commissioner. This incident also serves as a prelude to the non-cooperative or rather unwilling approach of the ministry of foreign affairs(MOFA) to work with the former High Commissioner. The author blames Islamabad’s lack of coordination(not keeping the High Commissioner informed of the developments and the bilateral meetings) and unprofessionalism(personal grudges at the forefront rather than effective diplomacy) for the consistent failure of their foreign policy. Basit reveals in the subsequent chapters that the presence of favouritism and nepotism in Pakistan’s foreign office is to be accounted as the root cause of the problem.

The book is further divided into time frames from here on, and in the epilogue he discusses the key issues concerning the future of diplomatic relations between the two states. Plenty of literature is available on the Kashmir dispute emphasising the historical context, military standoffs and other outside perspectives. Basit’s book reveals the stock-still diplomacy that plays out between the two countries and exposes the domestic politics of Islamabad. Hasty decision making coinciding with an ill-suited execution of their own policy has led Pakistan into an infinite loop with its neighbour. Basit describes Pakistan’s foreign policy as the tendency to follow decades old course of action and hoping for ameliorate results.

Basit pardons none on either side of the LOC (Line of Control).

Firstly, he has abruptly criticised the Pakistani leadership for undermining their own channels of communication and prioritising personal gains over the “interminable and abominable oppression”[i] of the Kashmiris. Criticism towards his motherland is specificity driven and concentrated towards his seniors in the foreign office and the former Prime Minister Nawaz Sharif.

Basit was kept in the dark about the bilateral visits of the two states. Starting from Prime Minister Sharif’s acceptation of the invitation for the swearing-in ceremony of his Indian counterpart -of which he was informed by an Indian entrepreneur, Sajjan Jindal-  to Jindal’s visit to Pakistan for a confidential meeting with the Pakistani PM which later turned out to be a probable discussion over the Jadhav case. The author condemns Sharif’s actions and criticises his rapport centric and business oriented approach which has hampered the Pakistani stand on Kashmir.

Secondly, he inculpates the Indian side for prioritising its domestic politics and henceforth disrupting the ongoing developments in the diplomatic relations. In addition to that he accuses the MEA for causing delay in bilateral talks and using flimsy excuses for the same which ultimately escalates tension between both the sides.

One of the very first incidents that he narrates is of him meeting with the Hurriyat leaders leading to the postponement of the foreign secretary meeting. This could be described as the first major temporary change (later the Indian side agreed to such meetings) in India’s position regarding Kashmir. Historically, the Hurriyat leadership has had meetings with the Pakistani representatives as they play a crucial role in the dispute and the Indian side has never had any issues with that. The government faced criticism from Indian scholars and eminent fellows as well for such an ill-conceived positional change. Herein, Basit was also introduced to the evil eye of the Indian media.

Basit provides the reader with a clarity of mantras(chant) of both the sides and has reiterated them throughout the book. The author has a firm belief over his mission statement and has retained his central argument throughout his three year tenure i.e. Kashmir is the core issue and unless a tenable solution is worked out, an optimistic situation is highly unlikely. In lieu of finding a viable solution, both the states have historically engaged in taking hasty decisions in times of crisis. There’s always a need for an incentive to act, and apart from domestic politics nothing significant has been motivating them to initiate bilateral talks. He writes “India is a difficult neighbour immersed in enigmatic complexes . On the other hand, Pakistan has its own serious difficulties. Thus, finding a middle ground on any bilateral issue is the holy grail of Pakistani and Indian diplomats”.[ii]

Contrary to the popular opinion, I believe that the author has a much more intelligible approach to diplomacy and is well equipped with this art. His understanding of the intricacies of diplomacy is fascinating and his explanations of the steps taken by him appear as the ideal way for Islamabad. The book is certainly an honest account, free of any kind of a bias towards his home country; rather one can find multiple instances where he appreciates the hospitality and love that he got from [iii]