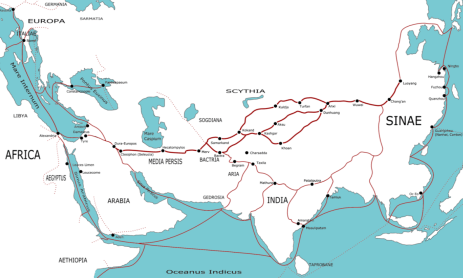 One Belt and One Road initiative would lessen the probabilities of nuclear war between India and Pakistan providing Pakistan a competence to monitor India’s naval activities in the Indian Ocean.
Pakistan plays a significant role in China’s Maritime Silk Route as part of China’s Belt and Road (B & R) initiative. The China-Pakistan Economic Corridor (CPEC) is a vital development project within China’s Belt Road Initiative (BRI) and serves as the crucial link between the maritime ‘road’ and land-based ‘belt’ aspects of the Belt and Road Initiative (BRI). India perceives this China’s Maritime Silk route is passing through South Asia a direct threat to its core strategic interest in the Indian Ocean as it wants to maintain Indian primacy in the Indian Ocean (IO) and Indian Ocean Littoral States. India’s great leaders have strong aspirations to be a blue water navy or the dominant naval power in the Indian Ocean since its inception in 1947. India’s Anit Mukherjee determines Indian Ocean strategy in three categories. One is to establish closer ties with the US and its allies, second is to strengthen its links with Indian Ocean Littoral states and last is to build up its military power ( including the induction of Nuclear capable Submarines into the Indian Ocean).

Indian Ocean Region (IOR) is the coastal area (consists of islands and states) lying in contact with the IO. It has become a renewed focal point of global economy, having substantial avenues for economic activities of Asia, the US and Europe. Therefore, all stakeholders are obliged to ensure the security of the Indian Ocean to avoid any miscalculation or misperception among all stakeholders. Moreover, China is expected to be the world’s largest oil importing country and India expected to be the largest coal importing country by 2020; therefore, there is an inevitable need for their cooperative efforts to ensure energy security.

On the other hand, the enlargement of the People’s Liberation Army Navy (PLAN) in the IOR is primarily due to the significant economic incentives. China has transported 173.9 million tons of oil from the Middle East to China, and 52.4 million tons from Africa to China in 2016. Besides, China has established its first overseas military base in Djibouti which is considered by India as part of China’s “String of Pearls” strategy and would engulf India. If India is developing its military (three wings: army, navy, air force) to maximize its power, likewise it may avoid feeding its fears related to China’s port development assistance in the IOR as China is pursuing its own national economic and strategic interests. India perceives that these ports can disrupt the refueling of India’s tankers, warships because of the presence of People’s Liberation Army Navy in the IOR.

The contemporary world is globalized and interdependent where states have to cooperate with each other in each walk of life. Therefore, India’s rhetoric regarding China’s development projects may prove unjustified in future. Here the question arises, India being one of the biggest trading partners of China why does India feel China would engulf it?
India has presuppositions that the development of Gwadar Port in Pakistan’s Baluchistan Province under China—Pakistan’s joint development project, “China—Pakistan Economic Corridor” will pave the way for the formation of Chinese naval base in Gwadar. Fueling fears against China, India has launched nuclear capable Submarine in the Indian Ocean. This nuclearization of Indian Ocean has serious security implications for Pakistan. Thus, Pakistan needs a strategic partner currently (in the form of “China”) to monitor India’s naval activities in the Indian Ocean. China can monitor the naval operations of both the US and India on the Indian Ocean.

Some of the recent events such as India-China military standoff at Doklam from 16 June 2017 – 28 August 2017 and India-Pakistan’s blame game on the unprovoked firing on the Line of Control region in 2017 and at the beginning of 2018 (left hundreds of people dead and injured), are the destabilizing incidents in the South Asian region. In the backdrop of these insecurities, Pakistan has to maximize its defense.

Most recently, an early formation of an alternative route against China’s B &R initiative by a quad of Australia, India, Japan and the US to contain China’s global influence may exacerbate some tensions at the global level. India being part of this quad may pursue its strategic objective against China’s B & R initiative. India considers China’s Maritime Silk Route projects in South Asia as part of its broader strategy of challenging Indian primacy in the Indian Ocean.

India here has certain doubts about Chinese aims to deploy Gwadar in the medium to long-term as a dual-use port, allowing the PLA key access into the Indian Ocean as well as bolstering Pakistan’s ability to deter any Indian advantage in the naval realm.

The Pakistani port of Gwadar, built, financed and operated by China is located at the union of the Gulf of Oman and the Arabian Sea, providing China access to a critical location in the Indian Ocean.

In between all these states, Pakistan is an essential part of China’s Belt and Road initiative can maximize it maritime security fittingly. Pakistan Navy is likely to buy eight more diesel-electric attack submarines from China soon. These are scheduled for delivery in 2028 to maximize Pakistan’s maritime security as a defensive measure. It may be a direct response to India’s August 2016 deployment of its first nuclear submarine, the Arihant. A second, even more, advanced Indian nuclear submarine, the Arighat, began sea trials last November, and four more boats are scheduled to join the fleet by 2025. That will give India a “nuclear triad,” which means the country will have the ability to deliver a nuclear strike by land-based missiles, by warplanes, and by submarines. The submarine is the key component. It’s considered the most “survivable” in the event of a devastating first strike by an enemy, and thus able to deliver a retaliatory second strike.

Lastly, Both China and Pakistan will be able to monitor India’s naval activities in the Indian Ocean so that India’s any attempt to get an advantage in the IO can be counterbalanced. If supposedly, that advantage will go unnoticed, there would be more chance of the nuclearisation.

When it comes to India and Pakistan, by contrast, the new generation of nuclear submarines may increase the risk of a devastating war between the two longstanding enemies.