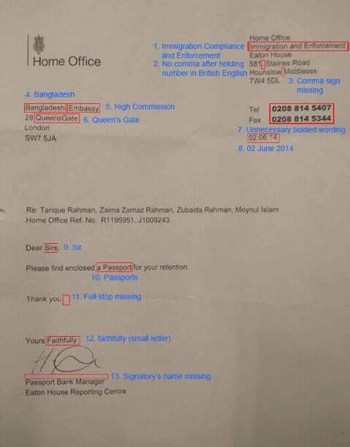 A junior minister in the autocratic government of Sheikh Hasina in Bangladesh, Shahriar Alam Joy, state minister in the Foreign Affairs Ministry has come under criticism for forging a letter from the UK Home Office and posting it in his Facebook account. On seeing this letter, even any novice can clearly spot several errors, typos and mistakes in the letter priving clearly the fact of forgery. Posting any such material on the social media is a punishable offence.

The letter had been circulated by the junior minister with the ulterior motive of defaming Tarique Rahman, Senior Vice President of Bangladesh Nationalist Party (BNP). Mr. Rahman has been living on forced exile in the UK since 2008 alongwith his wife Dr. Zubaida Rahman and daughter Zaima Rahman. They got political asylum in Britain in 2012.

Sheikh Hasina came to power in 2009 and had extended her tenure for another 5-years in 2014:through a voterless fake election; with the active collaboration of India,  China and Russia. Since 2009, thousands of people fell victims of foeced disapoearances and extrajudicial killings under the autocratic rule of Sheikh Hasina.

Junior minister Shahriar Alam Joy told the local and foreign media that a person seeking asylum in any country is requieed to surrender his/her ciyizenship at birth. This claim has been rejected by the jurists in Bangladesh.  It is learnt that the forged letter of the UK Home Office had been circulated by the junior minister at the suggestion of Sheikh Hasina’s son and advisor, Sajeeb Wazed Joy.

Following publication of this fake letter and the minister’s wrong claim centering surrendering citizenship, several newspapers had leaked another information which clearly had put the Bangladeshi autocrats into serious discomfort.

It is alleged that Sheikh Rehana in 1997 falsely declared herself as a Bangladeshi citizen and had obtained permission as the publisher and editor of a Bangla periodical named Bichitra.

Russia Connections of the UK MP:

It was revealed, back in 2014 by the controversial MP of the Labour Party [in UK], Tulip Rizwana Siddiq, that her mother Sheikh Rehana,  daughter of Sheikh Mujibur Rahman, founding father of Bangladesh had sought political asylum in the UK many decades back and had surrendered her Bangladeshi citizenship.

Quoting Tulip Siddiq, the Evening Standard Standard newspaper wrote: “Her mother sought political asylum here, which is how she met Siddiq’s father, who was studying for a PhD. He later had a stroke and was left in a wheelchair and unable to speak for five years. “I joined the Labour Party because of the NHS; my father received really good treatment here.””

The Emelda Marcos of Bangladesh:

It may be mentioned here that Sheikh Rehana is known as the ‘Emelda Marcos’ of Bangladesh who has been making billions of dollars through corruption since 2009. Her elder sister Sheikh Hasina is the current autocratic ruler in Bangladesh. According to reports, Sheikh Rehana has become  the richest female in South Asia owning a fortune of over US$ 9 billion. She has secret bank accounts in Switzerland, British Virgin Islands etcetera.

Moscow had given 3 percent kickback on the contracted amount, which was transferred to several bank accounts in Switzerland and the British Virgin Islands.

The comments made are the author’s own and not of the South Asia Journal.