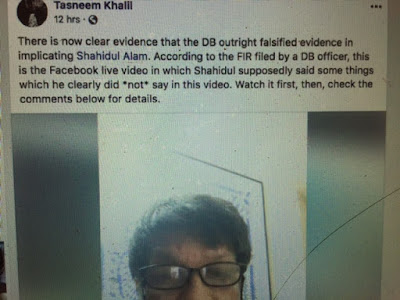 This blog has  already written how the police significantly distorted its First Information Report written against Shahidul Alam – which sets out the rationale for his detention – claiming that he had stated sentences which he had never said, in fact just inventing sentences out of the air.

However, with the assistance of the journalist Tasneem Khalil, this blog can now set out more distortions in this FIR.

Let us remind ourselves what the FIR states. It says that:

Using the link https:m.facebook.com/story.pho?story_fbid=10156666223500152&id=540020151 Alam gave the following statement in live video to incite the ongoing protest started by the the death of two students in a road accident: “The Present AL govt. is non elected and so do not have any mandate to continue, Bank looting is conducted by the people in power and their associates. Extra Judicial killing is conducted every now and then. Disappearances are common pheonomena, Quota system continues to facilitate only the people in power. The Quota Movement is subdued brutally. In the safe Road Movement police invited the armed BCL student to fight the unarmed innocent students. Female students are taken and then disappearing. Many innocent students are made injured by BCL students and police. Personally he believes that without the care taker Government no Free, Fair and Neutral Election is not possible in Bangladesh. So the present government must be over thrown.” (emphasis added – see below. The quote is written in English in the FIR.)

We have already explained in the previous blog that the quote is almost certainly a bastardised version of an interview which Shahidul gave to Al Jazeera which was broadcast at about 6pm (Bangladesh time) on Sunday, August 5, a few hours before he was arrested. It is bastardised – as in falsified – since the police have added in a number of sentences (the ones in bold) which Shahidul never actually stated. To read about this, click here.

However, what was confusing about this FIR is that it did not mention the Al Jazeera interview but only the Facebook internet address above, and this link did not go to any Facebook page belonging to Shahidul or which relates to Bangladesh. It goes to a page run by someone, based in the United States, called ‘Story Photographer ‘- which has links to a lot of photographs.

And, specifically, it does not link into any live video in which Shahidul says any of the words in the text above.

What Tasneem has now identified is that the police appear to have made an error in transcribing this address. Instead of writing “…. pho?story” it should presumably have been “…. php?story”. And if this change is made – the address becomes:

And this page does go to a video live link on Shahidul’s Facebook page.

However, in this video-live posted in the last afternoon of Saturday, August 4 Shahidul also does not say any of the words attributed to him in the FIR. This is what he says:

Hello. This is just a short update from home. I have returned from Jigatala and downloaded some of the pictures. Not much else to report except that I discovered that 67 students, with injuries, some with serious injuries, were admitted to the Japan Friendship hospital. Earlier, I was also told that … this last information came from medical staff and sounds fairly reliable. The earlier information I received was from a witness, an eye witness, who on Road no 2 who mentioned that about 10 students with injuries had been taken to the Popular Medical Lab on road no 2. He did mention that they had numerous types of injuries some with welts because of beating, but one student apparently had severe injuries and will probably have lost an eye. That was an eye-witness from road no 2. The 63 injured at Japan Friendship hospital is something that a doctor, who did not want to be named, specifically mentioned. The Awami League was in full force around there, heavily guarded by police. I saw flag-bearing cars coming in in an out of the place. One Patshulla student has been taken to the police station, the thana there, but they did eventually let his father in. I am not sure what the latest situation is. …. I am just going to turn the camera around, to show you my monitor screen which will show an image…. that is my monitor .. [Then goes to discuss pictures]

1. The FIR refers to a link which has nothing to do with Shahidul Alam

2. If this link is corrected, it goes to a live video on Shahidul’s Facebook page, where Shahidul does not mention any of the words or sentences mentioned in the FIR.

3. The quote in the FIR, which is the basis of Shahidul’s detention, seems to be based on an interview he gave to Al Jazeera on Sunday, August 5, 2018, hours before he was detained. Al Jazeera is not mentioned in the FIR

4. The police have falsified what Shahidul said in his Al Jazeera interview, misquoting him and adding sentences which he did not state.