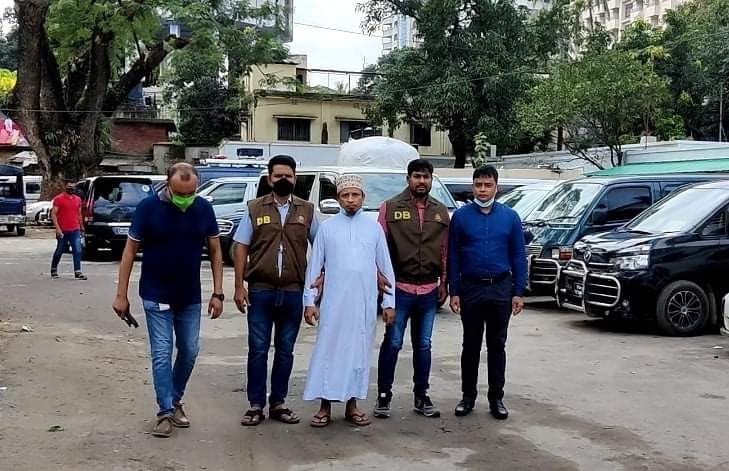 Dhaka Metropolitan Police on Tuesday arrested a controversial Islamic preacher who claimed on YouTube that he had interviewed the coronavirus in a dream, and asserted that the COVID-19 vaccine would turn girls into boys and vice versa.

Police arrested Mufti Kazi Mohammad Ibrahim, 57, from his Mohammadpur residence and interrogated him for several hours about his COVID-19 claims before announcing that charges would be filed against him.

“A case will be filed under the Digital Security Act against Ibrahim on a charge of his involvement in spreading disinformation and controversial comments on COVID-19 vaccines and other issues that could seriously confuse people,” Mohammad Faruk, the deputy commissioner of Dhaka Metropolitan Police (DMP), told BenarNews.

“Ibrahim failed to give the proper answer about his comments on religiously provocative messages and disinformation on digital platforms,” Faruk said without sharing details of the police case.

Earlier in the day, Mohammad Harun-or-Rashid, a DMP joint commissioner, told reporters that immediately after COVID-19 vaccine distribution began globally, the preacher claimed that women were growing beards and men were developing feminine voices after taking the jabs.

“He [Ibrahim] said he dreamed about corona, he also knew how corona would come. He also said that if the Corona vaccine is given, boys will become girls and girls will become boys,” Harun said, referring to COVID-19.

“He has been spreading such disinformation on social media sites for long. Once he claimed he had a dream about coronavirus and he knew in advance that COVID-19 would come.”

While Ibrahim was in custody on Tuesday, a group of his followers formed a human chain in front of the National Press Club in Dhaka to demand his release.

Ibrahim went live on Facebook early Tuesday claiming that plainclothes officers were outside his door to detain him. During the 20-minute broadcast, he claimed he became a target because of his remarks against India.

The Islamic preacher drew lots of attention last year when he claimed on YouTube that he had interviewed the coronavirus in a dream.

Following that incident, lawyer M. Mahmudul Hasan, served legal notices to the Religious Affairs, Education and Home ministries to take steps to prevent the spread of such information.

Detective Branch chief A.K.M. Hafiz Akter, who is a DMP additional commissioner, told reporters that the Islamic preacher was brought in for questioning because he had recently made “severely aggressive” and “irrational” comments on various issues, including the COVID-19 vaccine.

“Police decided to prosecute him because his explanation was not acceptable,” Hafiz said without sharing details about the interrogation.

In 2019, the Home Ministry named 15 Islamic preachers, including Ibrahim, who spread defamatory comments against democracy, cultural practices and women’s empowerment.

The preacher previously served as a principal of the Peace International School which was shut down by the government in 2016 over “controversial activities.” The government closed 14 branches around the country, including in Dhaka, after accusing staff of anti-state acts such as encouraging and teaching militancy.

Meanwhile, Md. Delwar Hussain, the principal of the institution where Ibrahim is a teacher, said the preacher’s arrest was part of a “conspiracy.”

“The Madrasa authority is observing the issue. We will provide legal support to Ibrahim because he is an experienced teacher,” Delwar told BenarNews.

“Legal action should have been taken against Ibrahim earlier to prevent the spread of unscientific theories,” BMA secretary-general Ehteshamul Huq Chowdhury told BenarNews, adding that many people were misled by Ibrahim’s statements.

“Rumors affect society very badly in a pandemic situation. That’s why stopping such misinformation is a must.”