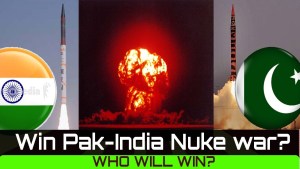 Confrontations between nuclear-armed states in Northeast and South Asia conform to a historical pattern of brinkmanship mixed with caution. But with risks still serious, a more effective response is required.

The spectre of nuclear war, once thought to be receding with the end of the Cold War, is back. In recent months, three confrontations have occurred between nuclear powers. North Korea conducted a possible thermonuclear test in September 2017 and announced in November that it had tested an intercontinental ballistic missile with the capability to target the American mainland.

Washington reacted with tightening sanctions, military exercises, and preparations for a possible war. In South Asia, India’s troops stopped the Chinese from constructing a road in Doklam, an area disputed by Bhutan and China close to the Indian border. In the meantime, border tension between India and Pakistan escalated with heavy small arms fire, shelling and occasional small-scale troop engagements at the Line of Control (LoC) separating their forces.

Though a serious crisis has not yet occurred, the confrontations conform to patterns of events leading up to past crises between nuclear powers. These include US-Soviet crises in Berlin (1961) and Cuba (1962), Sino-Soviet border clashes in 1969, US-China fighting during the Vietnam War (1964-69), the Kargil conflict between India and Pakistan in 1999, and a second crisis between the two in 2001-02.

All of these have featured tussles over territory, differences in political systems setting democracies against authoritarian polities (including a military-dominated hybrid regime in Pakistan); hostile image construction; and the pronounced use of rhetoric and threats aimed at each other but also at reinforcing domestic support. In each case, though, the prospect of a nuclear conflagration has induced a measure of caution – avoidance of major military thrusts (notable in the considerable fighting that took place in the 1969 and 1999 crises), the opening of negotiations between the two sides, and, sometimes, explicit stabilisation agreements.

The current episodes of brinkmanship and verbal duels exhibit the same pattern. In each case, as tensions have risen, a line of communication has been opened. North Korea has expressed a willingness to talk, while – despite hesitations – the United States has done the same; and North and South Korea have attempted to build bridges by coming together at the 2018 PyeongChang Winter Olympics.

Chinese and Indian forces wound down their confrontation and their Special Representatives met in December 2017 to defuse border tensions. And the Indian and Pakistani National Security Advisers met secretly at least four times in third countries to work toward stability. These are encouraging developments, but we cannot be sanguine about their stabilizing effects.

Potential To Spin Out of Control

None of the three issues has approached resolution. North Korea and the US remain at loggerheads: the US announced on 16 January 2018 that it had deployed nuclear-capable B-52 and B-2 bombers in Guam and was preparing conventional forces for military action. Tensions remain high on the India-China border: Indian troops ejected a Chinese civilian road construction crew at Tuting in the Indian state of Arunachal Pradesh, which is claimed by China, in December 2017; and reports have come in that Chinese forces have built up their presence in Doklam.

Cross-border firing between Indian and Pakistani forces continues to exact its human toll on the LoC. In each instance, notwithstanding moves to seek stability, the political differences that raised tensions remain in place.

There are additional problems that could cause any of them to spin out of control. First, local military commanders may take initiatives, causing clashes that will be difficult to reverse. This applies not only to South Asia’s tension-ridden land borders, but also to the Northeast Asian seas. Second, a local skirmish can quickly escalate owing to uncertainty about the adversary’s capability and the element of surprise.

On land borders, the presence of radar-evading capabilities such as cruise missiles is a factor; the short distances separating India’s forces from those of China and Pakistan place serious constraints with respect to response times. At sea (and above it for air forces), the absence of clear red lines is problematic in Northeast Asia.

Third, in the event that localised conflict does break out, it may quickly morph into nuclear conflict amidst rising tensions if conventional attacks accidentally target nuclear forces or command and control systems. Finally, since all complex systems are subject to what sociologist Charles Perrow calls “normal accidents,” a false alarm of impending nuclear attack during a crisis might set off a nuclear response.

The erroneous missile alert in Hawaii on 13 January is a warning that is hardly exceptional – such incidents have occurred regularly in the past. A similar error during a crisis could conceivably set in motion a series of escalatory reactions culminating in nuclear conflict.

What might be done to reduce the risk? At the unilateral level, Pyongyang and Washington should tone down their rhetoric, which generates not only public alarm, but tensions down their chains of command. The Trump administration needs to accept that North Korean nuclear reversal is an unrealistic objective and to undertake a policy shift from coercion to a mix of deterrence and negotiation.

Beijing must rethink its opposition to formalising the disputed Line of Actual Control (LAC), which separates Chinese and Indian troops. Indian Prime Minister Narendra Modi has already said publicly that an agreement on the LAC will not have a bearing on the border dispute. Islamabad, already under some pressure from the US to do this, needs to make good on an old commitment not to allow terrorist groups to attack India from Pakistani territory.

And New Delhi should, in tandem, rethink its Cold Start doctrine, which is centred on lightning thrusts and salami slicing of Pakistani territory for bargaining purposes. All four states should tighten internal controls over their militaries and avoid delegating authority to local commanders to take military initiatives locally.

Bilaterally, each pair can agree to stand down forces, reduce potentially offensive deployments, and ensure efficient crisis control systems are in place for communications during emergencies and in the event of accidents. These moves can be replicated at the multilateral level to generate a wider stabilising momentum.

Having pursued nuclear nonproliferation with a modicum of success, the major nuclear powers need to exercise their responsibility for making the world safer more fully. If they are not yet ready for a nuclear ban, they nevertheless owe it to themselves and the rest to find creative ways of avoiding multiple cold wars. It is not a good idea to wait for the next crisis to make the first move.