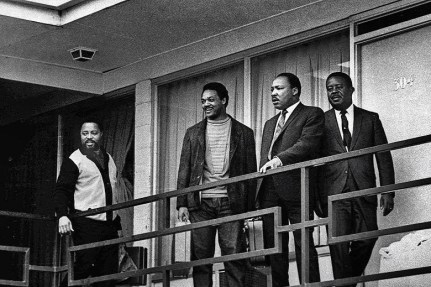 Martin Luther King Jr., second from right, stands on the balcony of the Lorraine Motel in Memphis, Tenn., on April 3, 1968, the day before he was assassinated. From left are Hosea Williams, Jesse Jackson, King, and Ralph Abernathy. (AP Photo/File)

“Our lives begin to end the day we become silent about things that matter.” Martin Luther King, Jr.

We cannot imagine a bus today segregated according to skin colour. That period of history is ugly. It took many lives and struggles to achieve the progress we enjoy in the present. The 39 years old young Baptist priest was organizing a march in the final day of his life in Memphis in support of the city sanitation workers for economic equality. It was 50 years ago on the 4th April 1968, the youngest Nobel laureate at that time, the courageous iconic leader of the civil rights movement; Rev. Dr. Martin Luther King Jr. was assassinated outside his room at Lorraine Motel in Memphis Tennessee. It was a single bullet that led to his fall.

On the balcony in front of his room 306, little did his killer understand the value of MLK’s presence.The killer silenced an advocate against racial injustice and a voice for the voiceless African American at the time of segregation in American society. Dr.King strongly believed in using nonviolence to win suppressed rights at that time, borrowing words and deeds of his mentor Mahatma Gandhi, who was also gunned down in another corner of the world.

Reading MLK is retrospect, Bill George a Senior fellow at Harvard Business School and expert of leadership explain “King’s legacy of staying true to his beliefs, pursuing his purpose, and exhibiting courage under pressure are profound lessons for leaders in all walks of life.” The most important lesson that all leaders can draw today from King’s leadership, George explains,  is to “recognize how you can make a difference in the world through your leadership, and then to step up to the challenge when opportunities present themselves. When you do so, undoubtedly you will encounter roadblocks and opposition. That’s when it becomes imperative to have the courage and resilience to persevere in order to fulfill your mission. In a very real sense, the character you demonstrate in achieving your purpose is the legacy you leave to those leaders coming along behind you.”

According to Peter G. Northouse “Leadership is a process whereby an individual influences a group of individuals to achieve a common goal.” Dr.King’s design of the process to influence a group and subsequently the entire nation towards one common goal was evident in his leadership. When looking at John P Kotter’s definition of leadership is fundamentally about change and what leaders do is create the system to elevate others to a whole new level to take advantage of new opportunities. Dr.King elevated the civil rights movement and all the followers to a different height from his nonviolent marches across the nation which eventually took attention of the Government at that time to address the issue.

King’s inspiring oration and meaningful emotion swept the enormous crowd gathered at Washington in 1962, August 28th. The powerful strong message was articulated in his “I Have a Dream” speech to call for an end to racism and restore dignity to the society he was living. The speech was a reminder that now is the time to take action and “is no time to engage in the luxury of cooling off or to take the tranquilizing drug of gradualism. Now is the time to make real the promise of democracy. Now is the time to rise from the dark desolate valley of segregation to the sunlit path of racial justice. Now is the time to lift our nation from the quicksands of racial injustice to the solid rock of brotherhood.” This was a strong appeal which still echoes in our society to secure individual freedom and equality regardless of race, religion, caste, class or skin color was the central theme of King’s dream, and to achieve his dream “that my four little children will one day live in a nation where they will not be judged by the color of their skin but by the content of their character”, he had to transform the thinking pattern of the society at that time.

Dr. King’s self-confidence and passion inspired others and courage to be a fearless leader especially by putting himself in danger many times in his short life. Despite being imprisoned thirty times he did not change his stance but navigated to achieve his goals despite the obstacles. Dr.King believed in mobilizing large crowds to overcome the obstacles “fire hoses can’t deal with a million people. Yes, the water will give out. Dogs can’t bite a million people. The United States Army wouldn’t know how to deal with a million people.” were his words.

One of his last writings was entitled “The World House” a brilliant piece worth revisiting today, especially to understand the importance of coexistence. Dr.King writes “A widely separated family inherits a house in which they have to live together. This is the great new problem of mankind. We have inherited a large house, a great “world house” in which we have to live together—black and white, Easterner and Westerner, Gentile and Jew, Catholic and Protestant,  Moslem and Hindu—a family unduly separated in ideas, culture and interest, who, because we can never again live apart, must learn somehow to live with each other in peace…We still have a choice today: nonviolent coexistence or violent co-annihilation. This may well be mankind’s last chance to choose between chaos and community.”

His strategic thinking as a leader is seen by the decisions he made to stage demonstrations at the right time for the television to make a significant impact on the entire nation. Dr.King voiced against the Vietnam war at that time and this was called treasonous, consorting with a foreign power and against the national interest. At the time of his death, he was under serious pressure from Government due to this. On his last visit to Memphis, Dr. King explained to his follower Jesse Jackson “You know, we got to go on to Memphis. We cannot leave those sanitation workers stranded. They have a right to watch their children graduate from high school and college. They have the same human rights that other people have. We’re going on to Memphis. Then we’re going to Washington, if necessary, and tie up traffic and go to jail. We’re going to force this Congress to shift from killing abroad to healing at home.”

King’s assassination caused widespread emotional responses and subsequent political tension. 76 riots with 2000 people injured, 28,000 jailed and 46 killed. Despite the ugly incidents on the same day in Indianapolis Rebert F Kennedy was addressing a gathering which created a deferent tone, a hope of creating a different society. The ripple of hope created on this day by RFK was a cooler air that eased the strain at that moment, if not a flutter of hope. The plea was the same message of Dr.King for national transcendence of racial, ethnic and generational mistrust to be healed and it was the first time he spoke of losing his own brother. It was ironic and tragic that RFK was also killed two months later at another hotel, this time the Ambassador Hotel in California.

Looking on Dr. King 50 years later his leadership and philosophy of nonviolence shine out for its authenticity.  As his daughter, Bernice A.King rightly said “The leader of the movement(Dr.King) was able to define it very clearly, we lost his voice and no one has emerged since that time to articulate the way he did”