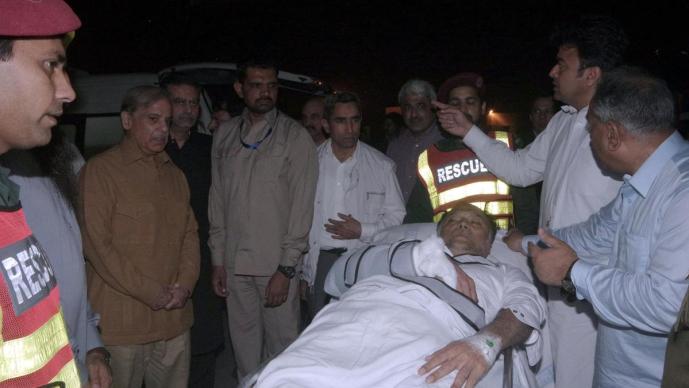 Officers and rescue workers move Pakistan’s Interior Minister Ahsan Iqbal on a stretcher, after he was shot during a rally in Narowal on May 6, 2018. Directorate General Public Relations Punjab handout / Reuters

An Islamist shot Pakistan’s Interior Minister, Ahsan Iqbal under blasphemy allegation. About three decades ago, Iqbal’s mother was behind the controversial blasphemy law, which has been vigorously used against liberal Muslims and religious minorities, since its inception. The recent attack shows the level of growing militancy and religious intolerance, which is gripping the Islamic country rapidly and making ordinary peoples’ lives unsafe. But the question is whom to blame?

(21 May 2018) – Pakistan’s Interior Minister Ahsan Iqbal, a Sunni Muslim, was shot soon after a public meeting in the village Kanjroor, District Narowal, about 150 miles southeast of Islamabad, the capital of Pakistan, on 6 May at about 6 pm. The police force overpowered the attacker, Abid Hussian immediately after he fired the minister with a pistol. Hussian told the police that he shot at the minister for blasphemy against Islam, but he could not specify the allegation. According to his statement, a Muslim saint ordered him in his dreams to do so.

The minister is from a deeply religious family, and in 1986 his mother, Nisar Fatima, was a driving force behind Pakistan’s controversial blasphemy law against Islam. Mrs. Fatima was a member of a conservative Islamic political party, Jamaat-e-Islami, which vigorously supported the military dictator General Zia-ul-Haq (1977-88, and his Islamisation process of the country. An Islamic scholar, Dr. Tahirul Qadri, who claims to be a progressive Muslim, advocated the death penalty for blasphemy even before establishing evidence of intention. Iqbal’s maternal grandfather was a member of Majlis-e-Ahrar-ul-Islam, a religio-political party, which was known for its anti-Ahmadi campaign and pro-blasphemy laws. Through a constitutional amendment in 1974, Pakistan’s Parliament declared the Ahmadi community non-Muslim, but the community considered themselves Muslim.

The attacker, Hussain, 22, was a leader of the youth wing, of an ultra-conservative Islamic religious, political party Tehreek-e-Labbaik (TLP). The party got prominence when it sat up a protest sit-in at Faizabad, Islamabad, for about 20 days in November 2017. The violent protesters blocked the main road of the capital and made people’s life problematic, but the state was silent during the whole episode. The party was protesting against some minor changes in the Election Bill 2017, which were made in October last year. Although the government removed the changes, TLP carried on the protest. The party considered those modifications an act of blasphemy. The extremist mob beat up police personals and damaged public and private properties. Iqbal was the only government minister that was more critical to the protesters and their violent actions. However, he could not take any strict action because of the internal politics in the country. In the end, the protesters forced the government to make a deal, which was facilitated by a serving army officer. Furthermore, Punjab Rangers Director General Major General Azhar Naveed Hayat Khan distributed Rs.1000 to each protester as traveling cost for their return journey.

Tehreek-e-Labbaik (TLP) was created by a fundamentalist Muslim religious leader Khadim Hussain Rizvi after the judicial execution of Mumtaz Qadri, a terrorist who killed Governor of Punjab Salman Taseer, a liberal Muslim. Governor Taseer advocated the release of Aasia Bibi, a poor Christian mother of four. She was arrested in June 2009 and then convicted on blasphemy allegations, which she denied. She is still serving death sentence in jail, and her appeal is pending in the Supreme Court for so long. Ironically, Governor Taseer’s party, Pakistan People’s Party (PPP), which is considered to be a progressive party, stayed silent when most of the Urdu (national language of the country) media ran an effective hate campaign against Taseer, and portrayed him as a blasphemer. He was assassinated by his bodyguard, Qadri, in 2011. Ahsan Iqbal and his party, Pakistan Muslim League-N (PML-N), a conservative political party, always supported the blasphemy law, which is mainly used against poor Christian minority.

An Anti-Terrorism Court (ATC) issued an arrest warrant of Khadim Hussain Rizvi, the leader of TLP, about the Faizabad sit-in of last year. Despite the Court orders, Punjab Law Minister Rana Sana Ullah, from PML-N, said that the government could not arrest Rizvi, because of an agreement signed by the government with him. Paradoxically, Punjab is the most powerful province of the country where some banned militant organizations, including Sipah-i-Sahaba Pakistan and Jamaatud Dawa, have their visible presence. According to Minority Concern of Pakistan, unfortunately, the ruling party of PML-N has no appetite to control them. The party instead prefers pleasing them for the electoral benefit.

PML-N is not the only political party, which pleases the religious right. Some other parties also use religion and Islamists for political gain. Khyber Pakhtunkhwa’s (KPK) government granted 300 million Pakistani rupees from public funds to Daul Uloom Haqqania. The madrassa is run by Maulana Samiul Haq, who is known for his inclination to Taliban. Last year, a mob killed a Muslim student Mashal Khan on false charges of blasphemy inside Abdul Wali Khan University Mardan, KPK province, which is run by Imran Khan’s Pakistan Tehreek-e-Insaf (PTI). According to media reports, PTI’s local councilor Arif Mardan was also involved in Mashal Khan’s mass murder. During his latest public rally in Lahore on 29 April, Imran Khan once again presented himself as more Islamic than others.

Since the inception of Pakistan, Islamic religious sentiments play an essential role in the socio-political landscape in the country. Because of the on-going religio-political phenomenon, the real democratic forces are marginalized. Therefore, even after seven decades, the democracy is still weak in Pakistan. Muhammad Amir Rana, a security analyst based in Islamabad, analyzed the present situation in his recent column, which was published in daily Dawn on 20 May. He wrote, “Although political parties condemned the attack on the interior minister, no one dare challenge the driving force of religious sentimentalism. Perhaps they are not willing to do what they perceive as tantamount to putting their political careers at risk.”

The blasphemy law has been widely used as a tool of persecution against religious minorities, especially Christians and Ahmadis. In the past few years, many Christian localities have been attacked and burnt by violent Muslim mobs in Punjab province alone. The attack on Iqbal, a Muslim minister, shows the gravity of on-going religious intolerance in the country. If the government ministers, who had a lot of security, are not safe, then who else can? It is easy to blame and kill someone under the false allegation of blasphemy. Since the blasphemy law was introduced, the extrajudicial killings become rampant. Since the 1980s, more than 70 men and women have been killed either by a violent mob or by individuals. Some were killed even in the police custody. Hundreds of people are facing trials and are locked up in jails under false allegations. However, the state is still complacent and bowed down to those forces who used religion for their ultra-motives.