With party equations and alliances yet to be ironed out for the 2019 general election, the coming together of anti-BJP leaders at Kumaraswamy’s swearing-in will likely kickstart the battle to counter BJP nationally.

New Delhi: Call it Janata Dal (Secular)’s luck or strategic positioning, H.D. Kumaraswamy, with only 38 legislators under his control in a 224-member assembly, took oath as the chief minister of Karnataka on May 24. The moment throws you back to 1996, when his father, H.D. Deve Gowda, with merely 17 MPs, went on to become the prime minister of India in 1996 as the leader of the United Front.

As the chief minister in 2018, Kumaraswamy now starts his new innings in partnership with the Congress, with which he has had a bittersweet relationship. It was Kumaraswamy, who with 58 seats in 2004, had allied with the Congress to form the state government only to walk out of the alliance two years later. The JD(S) in 2004 had managed to outplay its main rival in the Janata parivar, Janata Dal (United)-led by Ramakrishna Hegde and J.H. Patel, who had allied with the BJP, by cleverly stitching together a Vokkaliga-Muslim vote bank for itself in south Karnataka and parts of north Karnataka.

But the alliance was only temporary as Kumaraswamy joined hands with the BJP to become the chief minister himself. Deve Gowda then had taken a public position against his son as he realised that the alliance may alienate Muslims (around 13% of the state’s population) and damage its own prospects in the state. It was, after all, the powerful Muslim-Vokkaliga base that had catapulted the party to a prominent position in the state. From only 10 seats in 1999, it rose up to get 58 seats in 2004. Perhaps, this crucial consideration provoked Kumaraswamy to violate the arrangement he had with BJP – the chief ministership was supposed to rotate between the JD(S) and BJP but Kumaraswamy pulled out of the government with his MLAs when BJP’s turn came in 2007.

The BJP projected Kumaraswamy’s pulling out as a case of classic “betrayal” and reaped the benefits as it emerged as the single-largest party with 110 seats in the 2008 assembly polls. The saffron party formed the government with the help of independents but got mired in one controversy after another, the most important being the Rs 35,000 crore illegal mining scam.

The JD(S), after remaining out of power for more than 10 years, has come back to power once again with the help of the Congress. The grand old party, in a swift move, decided to play second fiddle despite having 78 MLAs and support Kumaraswamy as the chief minister. It is content with having the deputy chief minister’s post and has interestingly chosen prominent Dalit leader G. Parameshwara, perhaps to send a strong message to the Karnataka’s Dalits – who appeared to be split between the Congress and the BJP in the recently-held polls.

At the same time, the Congress has kept the lion’s share in the government with 22 cabinet berths while JD(S) has got 12. Kumaraswamy has kept the important finance ministry with himself. It remains to be seen whether he fulfils the big welfare promises his party had made for farmers and the poor in its manifesto.

H.D. Kumaraswamy offers prayers at Chamundeshwari temple in Mysore ahead of his swearing-in on May 23. Credit: PTI

The turn of events over the last few days is significant for both the JD(S) and the Congress. The JD(S)’s core Vokkaliga support base, which was getting a little iffy with rising prominence of Lingayats and Kurubas in state polity, will feel happier with Kumaraswamy at the helm of affairs. The party can also regain its lost ground in other parts of Karnataka as it now holds the most important strings in the state. More importantly, the regional party has announced its arrival at the national political stage a year before 2019 general elections.

For the Congress, coming back to power after a long-winding tussle with the BJP, should infuse some energy in the party’s rank and file. With its prompt move to ally with the JD(S), it has given a signal to all other regional parties that it is ready to play a supportive role as long as they occupy an anti-BJP pole. In the coming days, if its efforts materialise, it may as well become the fulcrum of an anti-BJP front under Rahul Gandhi’s leadership.

Kumaraswamy, hence, took great care to turn his oath-taking ceremony as a platform for all anti-BJP parties. The swearing-in ceremony of H.D. Kumaraswamy as the chief minister of Karnataka has thus become a matter of talking point as the both the JD(S) and the Congress has projected the event as a show of opposition unity ahead of the 2019 general elections.

H.D. Deve Gowda, the JD(S) supremo and former prime minister, has already said that his party invited all the anti-BJP leaders for the function, the motive being to bring together “all the secular, democratic forces to the communal BJP”. He said that this political platform was also meant to “send a message to anti-BJP forces across the country”.

It was indeed a star-studded event with politicians of all hues, except saffron leaders, attended the event. Arch rivals Mamata Banerjee of the Trinamool Congress and Sitaram Yechury, the general secretary of the CPI(M) were seen greeting each other. The last time the two were seen together was in 2015 at Nitish Kumar’s swearing-in ceremony in Bihar when Kumar was elected as Rashtriya Janata Dal-Janata Dal (United) Mahagathbandhan leader. Later, Kumar walked out of the alliance and formed government with the BJP.

Tejashwi Yadav, the RJD scion, was one of the most-prominent faces at the event. N. Chandrababu Naidu of Telugu Desam Party and Ajit Singh of Rashtriya Lok Dal were seen interacting cordially on the podium. While Kamal Haasan, who recently floated his party, Makkal Needhi Maiam, had confirmed his presence, he instead went to Thoothukudi in support of the anti-Sterlite protesters who were brutally shot at by the Tamil Nadu police on May 22.

Again, Bahujan Samaj Party supremo Mayawati and Samajwadi Party’s Akhilesh Yadav – political enemies until recently when they came together to fight the BJP in Uttar Pradesh – were seen sitting together. The significance of the moment can be gauged from the fact that former Congress leader Sonia Gandhi, who has not been keeping well, too attended the event. Karnataka assembly election results has made it clear that regional parties will play a crucial role in case the BJP does not manage a simple majority on its own in 2019. While its own allies may assert their weight against the BJP, the regional parties may also want to cobble up a united opposition pole.

The problem with such a proposition, however, has been the regional parties’ stance on Congress. Some like K. Chandrasekhar Rao of the Telangana Rashtra Samithi (TRS) and the CPI(M) – although it cannot be called a regional party as it has lost it grip all over India except Kerala – have already indicated that a tie-up with Congress should be avoided and are instead calling for a non-BJP, non-Congress front.

However, it is being said that the TRS may change its stand against its principal opposition party in Telangana as it helped the Congress and JD(S) MLAs from Karnataka secure a safe haven in Hyderabad ahead of the crucial floor test only recently. This was seen as a positive overture by the TRS towards the Congress. However, with Rao giving the swearing-in ceremony a skip can also be interpreted otherwise.

Similarly, the BJD has remained aloof from the discussions of a “federal front” and has been insistent on projecting itself as only a Odisha-based party. A party leader told The Wire that such a position was strategic in the context of the state, where BJP is fast-emerging as its primary opposition. He said that the party has won the state elections consecutively only because it has focussed only on state-level issues and has refused to be a part of national politics. However, given the party had earlier broken ties with the BJP, it is likely that the BJD will support a non-BJP government at the centre.

Jaganmohan Reddy of the YSR Congress, who is expected to lead the opposition in next year’s Andhra Pradesh assembly elections against Naidu, was absent too. This has led to speculation that by not attending the ceremony, he has left a window open to ally with the BJP in case of a hung verdict both in the assembly and at the Centre. However, YSR Congress in recent times has been aggressively opposing the Modi government over its decision to deny Andhra Pradesh a special category state status.

CPI(M), which has been ambivalent about its opposition to the Congress, in its party congress held recently, had chosen the middle path regarding tie-ups with the Congress after a long-winding debate between the so-called Prakash Karat and Sitaram Yechury camps within the party. At the end, the biggest Left organisation agreed to have “no political alliance” with the Congress as against Karat’s line of “no understanding or electoral alliance”, leaving the door open for issue-based support to the Congress. This reflected in the party’s May 22 politburo decision that both the general secretary, Yechury, and Kerala CM, Pinarayi Vijayan, would attend the swearing-in ceremony. 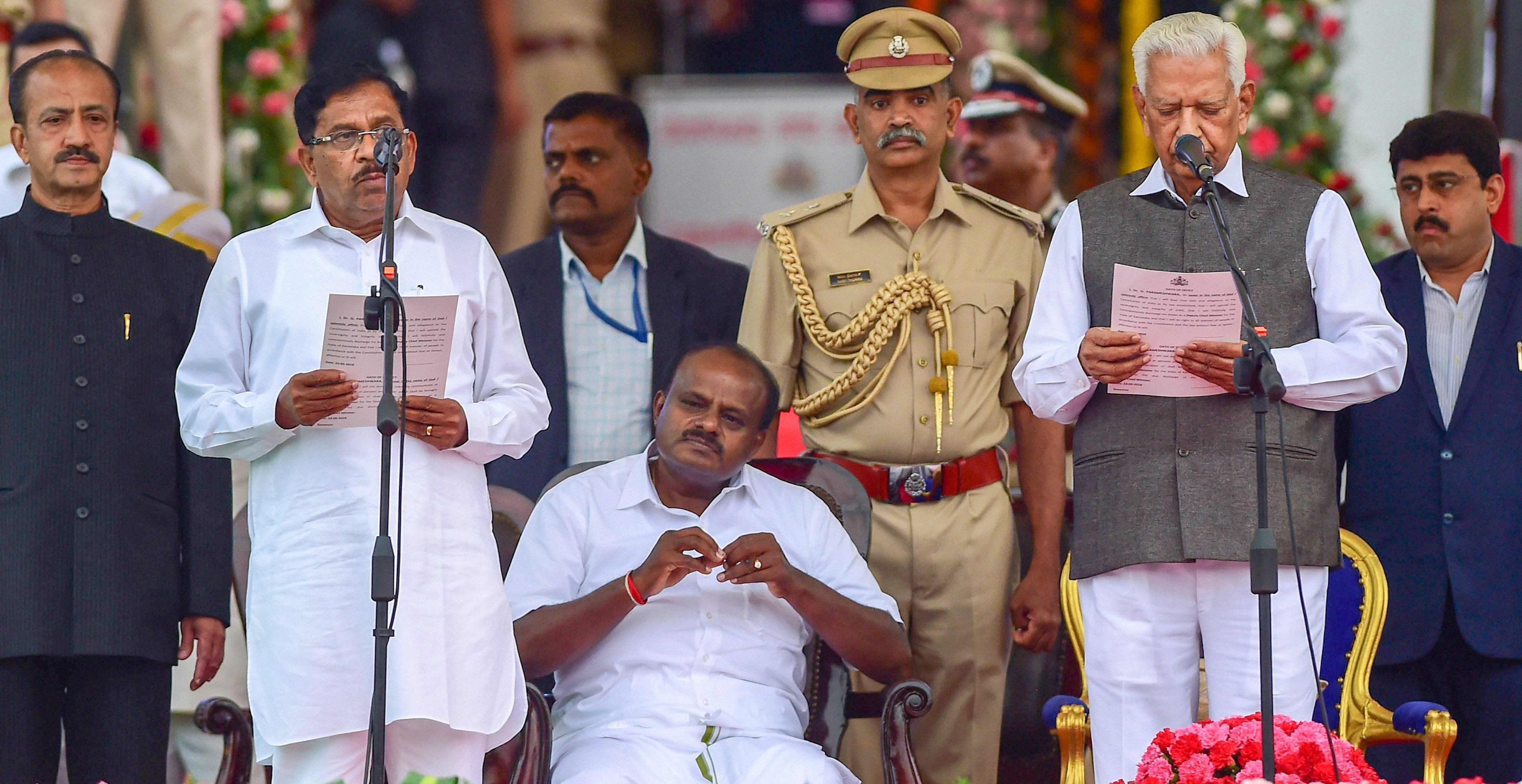 The other group of regional parties which were present on the occasion like the Janata Dal (Secular), Samajwadi Party, Bahujan Samaj Party, and the Trinamool Congress are open to state-specific pre-poll alliances with the Congress, depending on its strength in the respective states. Thus, while the Congress may play a smaller role in states like UP, where it is not a substantive force, regional parties like BSP may have to settle for a compromise with the Congress in states like Rajasthan, Chhattisgarh or Madhya Pradesh, where the grand old party is the main opposition party.

The equations will have to still be worked out – it is in this politically-dynamic context, the coming together of anti-BJP leaders at Kumaraswamy’s swearing-in assumes importance. Ahead of the ceremony, originally scheduled to have taken place on May 21 but was postponed to May 23 because of former prime minister Rajiv Gandhi’s death anniversary on May 21, Deve Gowda in an interview to The Hindu has, however, categorically made his view clear by saying that “any anti-BJP alliance without Congress is impossible”.

The BJP has had to suffer a huge face loss in Karnataka as it tried to cobble up a majority before the floor test. Allegations of influencing governor’s decision to give Yeddyurappa 15 days to prove its majority, poaching, bribing and offering ministerial berths to opposition MLAs were made against it. And when eventually it could not muster enough numbers, its dream of increasing its footprint in India’s south went for a toss. The BJP’s aggression in Karnataka to form its government may have further strengthened the resolve of opposition parties to counter the BJP nationally.

Kumaraswamy now attempting to cement the anti-BJP front, the efforts of which were on for several months, may cost the BJP dear in the coming months. The coming together of leaders from across India at the swearing-in ceremony today may just be that kickstart the anti-BJP front desperately needs.