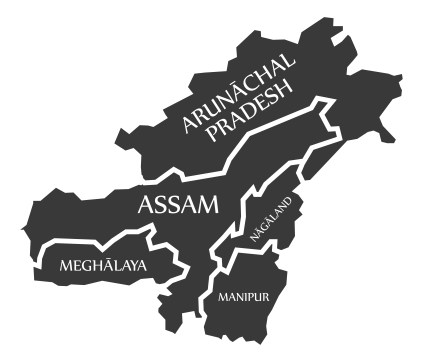 Assam, if not the Barak valley, is burning. At least, if someone follows the media reporting and related contents, it’s convincing that the Brahmaputra valley of the Northeastern State has been witnessing an uproarious situation for a few weeks now. The other States, precisely Meghalaya, maintains their stand in favor of Assam.

Few observers may compare the situation to the days of Assam agitation, which culminated in 1985 with an accord signed by the agitators and the Union government in New Delhi. Millions of participants in the six years long agitation wanted to deport all illegal migrants (read Bangladeshi nationals) from Assam (means India), but the leaders agreed in the accord to accept all the migrants till 25 March 1971 in the State.

The agitation witnessed the sacrifices of over 850 martyrs and thousands of others in different shape and sizes, who all wanted to deport the illegal migrants with the national cutoff year (1951). But the accord only agreed to identify just those people, who entered Assam after 24 March 1971, as illegal foreigners. Need to be mentioned that the agreement was never placed in the Parliament for endorsement.

After more than three decades of the signing of the accord, the people of Assam (more precisely the civil society group representatives and media stalwarts in Brahmaputra valley) are fantasizing of another uprising. This time it is against the Centre’s initiative to grant citizenship to those religious asylum seekers from Bangladesh, Pakistan, and Afghanistan.

Hundreds of Assam based organizations, including few from other parts of the region, are on the streets asking the central government to withdraw the citizenship amendment bill 2016. They came out with a clear demand that the Narendra Modi led government’s move to grant citizenship to those asylum seekers (including Hindu, Sikh, Buddhist, Jain, Parsi, and Christians from the three neighboring countries and must have taken shelter in India before 31 December 2014) must be abandoned.

Their logic includes that religion can not confer Indian citizenship as it is a secular country and if done it would go against the spirit of the constitution. The other one, which has been supported by 95% protesting organizations, argues that Assam has already taken the burden of numerous illegal migrants (from 1951 to 1971) and it must not get more migrants, as they would destroy the State’s demography and Assamese as a language.

The protest escalated when the Joint Parliamentary Committee (JPC) over the amendment arrived in Guwahati in the first week of May for hearings. Some indigenous organizations, local politicians, intellectuals, media personalities, etc. of the State assembled on the venue and raised their voices against the bill. However, subsequent hearings in Silchar of Barak valley witnessed a different picture as most of their organizations supported the bill.

Otherwise, almost all organizations in Brahmaputra valley and showing a rare unity among the editors of prominent newspapers and news channels based in Guwahati came out with a strong statement opposing the Centre’s move.
They not only issued media statements elaborating their point of views but also met the State chief minister Sarbananda Sonowal, responding whom the Bharatiya Janata Party’s leader assured that he would not do anything wrong to Assam.

But contrary to all hue and cries, a forum of nationalists came out with a media statement, which was subsequently published in various newspapers and alternative media space, emphasizing on rational debates over the pertinent issue rather than creating sentiments with manipulated facts among the common people.

Patriotic People’s Front Assam (PPFA) claimed in the statement that ‘a section of Assamese intellectuals and civil society groups tried their best to project the citizenship amendment bill in a bias perception, as if, the whole initiative is Assam centric.’ Those biased individuals also stated that once it turns into law, millions of Bengali Hindu people from Bangladesh would be dumped into Assam and the practice will continue for decades to come, it added.

The PPFA statement also claimed that the motivated elements ‘cleverly avoided the fact that those asylum seekers are not merely Bengali Hindus, but also a mix of Rajbongsi, Hajong, Jayantiya, Bishnupriya, Chakma, Garo, Khasi, Boro, Adivasi, etc. people’. Moreover, all these people became the victims of Pakistan’s partition game plan and had to live in a foreign land, for the creation of which they were not at all responsible, the statement asserted.

Extending support to the amendment, the PPFA, however, insisted that the asylum seekers from the neighboring countries must be distributed judiciously across the vast country. Moreover, those who prefer to stay legally in Assam, they should adopt the Assamese language as their medium of instruction, as it would ‘help in promoting the Assamese culture and contributing for a stronger and safer India.’

The PPFA also reiterated its old stand to detect all illegal immigrants from the then East Pakistan (and later Bangladesh) with the cut-off year of 1951 as it applies to the entire nation. It argued that the spirit of Assam movement (1979 to 1985) was to deport all foreigners since 1951, for which the martyrs-Khargeswar Talukder being the first, sacrificed their lives.

The forum also claimed that the migrants who entered India between 1951 and 16 December 1971 should be treated as East Pakistani nationals, as Bangladesh emerged as a sovereign nation only after 16 December (certainly not on 25 March 1971 as often reported in the media) following the surrender of Pakistani forces under the leadership of AAK Niazi to the Muktijoddhas (troops of Bangladesh freedom struggle).

It clarified that Bangla father of the nation Sheikh Mujibur Rahman only declared the independence of Bangladesh on 25 March 1971. But till 16 December of the year, the land was very much under the control of Pakistani authority, and hence it cannot be termed as Bangladesh (so the residents as Bangladeshi nationals), the statement pointed out.

Finally, the PPFA statement argued that if the deportation of illegitimate immigrants (read Bangladeshi) becomes impossible or too difficult to deal with, because of serious humanitarian and international crisis, the Union government should think of offering work permits (without voting rights) to them with an aim to resolve the issue amicably.

For reasons best known to the State’s media outlets, the PPFA statement was neither discussed nor followed up. However, few other organizations including Hindu Jagaran Mancha, Akhil Bhartiya Vidyarthi Parishad, etc. came out with official statements supporting the citizenship amendment bill. They claimed that the initiative would not affect the Assamese community as a whole, but it would help the nation to a great extent.