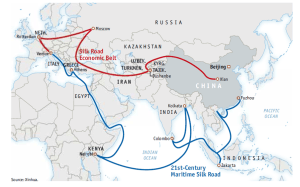 It is becoming increasingly apparent that China is suffering from sort of superiority obsession, imagining that  it can dominate and conquer the world and it is adequately clever to do so. Several acts of China in the past prove such an approach which has been well noticed by  the Asian nations, who now feel apprehensive about China’s aggressive postures on several counts and not knowing about  the shape of things to come.

China’s aggressive stances too many:

China forcibly entered and occupied Tibet claiming the peaceful country as it’s own. Seeing that the world governments have only reconciled themselves to the aggressive acts of China against Tibet, China has now become emboldened, taking the world opinion and reaction for granted.

The new aggressive postures of China about the South China Sea has upset the neighboring countries like the Philippines.  In the same way, China has caused deep anxieties to Japan, and other nations by its aggressive stance about Senkaku island.

Of course, China’s hostility to India is  well known,  which reflects China’s desire to cut India to its size, since India is one country that can challenge China on several fronts in future, if not now.  China claims Arunachal  Pradesh province  in India as it’s own, just as it proclaimed  Tibet as it’s own earlier.

China is so aggressive in its plans to dominate Asian countries and the world that it protests at any support or recognition to the Tibetan leader the Dalai Lama, whom China drove out of Tibet, in any part of the world and is even protesting against the  Dalai Lama visiting Arunachal Pradesh province in India.  While China is not losing any opportunity to kick start issues with India, the latest is its decision to suspend the entry of Indian pilgrims undertaking the Kailash Mansarovar pilgrimage.  It has gone to the extent of stating that India needs to be taught lessons.

When Prime Minister Modi was received with warmth by  U S President Trump, China has expressed concern about this, fearing that  close relationship between India and US could impact China’s plans to dominate the world.

Apart from several aggressive militant postures against the Asian countries, China is also using its economic muscle power to have its way to achieve the objective of world domination.

One can see that Chinese led Belt and Road initiative is an yet another attempt by China to get increased space for itself in the global sphere and get a stranglehold over international economic and industrial growth profile.

China’s close relationship with Pakistan and it’s enormous and massive investment in Pakistan through the Economic Corridor Projects is part of China’s plans to get itself entrenched in Pakistan territory in a big way and permanently. China is now playing such an important role in industrial and economic development projects in Pakistan that it appears that there is no way that Pakistan can get rid of China from its territory if Pakistan would so desire at any time in future. One can see that Pakistan is now in the vice-like grip of China, as Pakistan can never repay the huge loan that China is extending as part of the Economic Corridor Projects to Pakistan.

The similarity to Hitler’s Germany:

One can see the similarity in approach between Adolf Hitler in Germany before the world war II  and the present  Chinese government.
Hitler wanted to conquer whole Europe so that the world would be under his thumb. China’s acts  give an impression that it has the same policy and approach like that of Hitler, to dominate  Asia so that it would emerge as the undisputed leader of all countries in the world.
Like Hitler’s Germany, the present Chinese government has suppressed freedom and dissent in  China, and even Nobel laureate in China remains in prison, apart from many other Chinese citizens who were daring enough to assert freedom and liberty.

In the case of Hitler’s Germany and the present Chinese government, no one in the country could question anything that would be done by the government. By this, Chinese government ensures that no one in China would challenge the aggressive postures of the Chinese government about Tibet and other countries as part of China’s ambitious expansionist targets.   The approach is to prevent the sane voices in support of fairness and peace being heard.

Need to put China on notice:

Asian countries would be the most affected by China’s aggressive plans and priorities, and they need to assert themselves before it would become late.

The writing on the wall is clear, and the Asian countries should not hesitate to put China on notice so that the Chinese government would be made to realize that it cannot have its own way without massive resistance.

Can  China succeed where Hitler failed ?