Of the 66 top bureaucrats in Muslim-majority J&K at this time, 38 are from other states. Of the 12 sitting judges at the high court, only two are Muslim. And there is not a single Muslim officer in the LG’s secretariat. 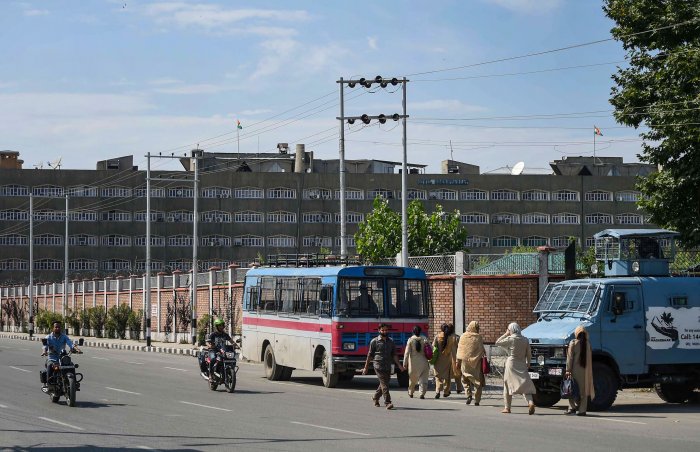 A view of the Civil Secretariat in Srinagar. Photo: PTI/Files

Irfan Amin Malik
Srinagar: An officer of the Kashmir Administrative Service (KAS) has alleged that Kashmiri and Muslim officers have been deliberately sidelined or kept away from key positions since June 2018, when Mehbooba Mufti, the last chief minister of Jammu and Kashmir, lost power.

“This process picked up pace when the Union government abrogated Article 370 last year,” said the KAS officer who serves at the Civil Secretariat, Srinagar, on the condition of anonymity.

According to the officer, after August 5, 2019, when the Union government stripped J&K of its special status and split the erstwhile state into two union territories (UT), local Muslim officers disappeared from key positions in the secretariat.

“Today when you go into the secretariat you find non-Kashmiris and non-Muslims holding important meetings, making decisions and keeping the Muslim and Kashmiri officers away,” the officer added.

Once a state, J&K is now a Muslim-majority union territory. According to the 2011 census, Muslims constitute 68.31% of J&K’s total population of 12.5 million people and Hindus comprise 28.43%. Muslims form the majority in 17 out of the 20 districts of J&K, yet the number of local officers in the UT’s administrative services is very low.

For example, Lieutenant Governor Manoj Sinha’s secretariat does not have even a single Muslim officer. All the 13 officers in the Raj Bhavan family (members of the LG’s secretariat) are non-Muslims and non-Kashmiris. Sinha is a former Union minister and senior BJP leader from Uttar Pradesh.

Similarly, there are no Muslim officers among the senior staff of chief secretary B.V.R. Subrahmanyam, director-general of police (DGP) Dilbagh Singh and Chief Justice Gita Mittal.

Of the four advisers to LG Sinha, two are Muslims, but they do not have roots in Kashmir Valley. Not one of the divisional commissioners or the police chiefs of J&K is a Muslim or even from the Kashmir Valley.

Where are the locals?

On February 6 this year, the Union government abolished the J&K state cadre of the civil services and made it part of the Arunachal Pradesh, Goa and Mizoram union territories.

Many senior Indian Administrative Service (IAS) and KAS officers believe that this may demotivate Kashmiri candidates from appearing in the competitive exams for the civil services, with the result that Kashmiris may completely disappear from the administration.

The number of local officers in the IAS state cadre of J&K has seldom been high. For example, of the 58 IAS officers who had formed the state cadre of the erstwhile state of J&K in 2018-19, only seven had been Kashmiri Muslims. These included Dr Shah Faesal, who had resigned from the service in January 2019, bringing down the number to six.

Today, of the 66 top bureaucrats in J&K, including those from the civil secretariat and the LG’s secretariat, 38 are from other states.

At the civil secretariat, key departments such as home, power, finance, revenue, health and environment are headed by non-Muslim officers.

The only bureaucrat from Kashmir currently in charge of a vital department is Asgar Hassan Samoon, principal secretary for school education.

According to J&K’s general administration department, there are currently five commissioner secretaries, of whom only two are Muslims. There are eight principal secretaries, but only one is Muslim. The commissioners of finance, revenue, health and medical education are all non-Muslims. Thus, of these 16 officers, only three are Muslim. And in the J&K UT at this time, of the 66 top bureaucrats, 38 are from other Indian states.

According to figures available with the J&K government, of the 20 districts of J&K, nine have Muslim deputy commissioners, but only four of them are from the Kashmir Valley.

Meanwhile, in the high court, the last Kashmiri to hold the position of chief justice was Bashir Ahmed Khan in 2007. At present, of the 12 sitting judges at the J&K high court, only two are Muslims. “This is the first time in my career of 15 years that I have seen only two Muslim judges here,” a senior advocate told The Wire. “The J&K high court should have a 50-50 ratio of Muslim and non-Muslim judges,” he added.

Of the seven deputy inspectors-general of police in J&K, two are Muslim but none are from J&K. J&K has 23 police districts, seven of which have Muslim superintendents of police (SSPs), of whom only three are from the Kashmir Valley.

And in June 2019, the then governor’s administration had sacked J&K Bank’s Muslim chairman Parvez Ahmed about four months before the end of his term, replacing him with R.K. Chibber, a Hindu. Ahmed had been accused of nepotism, financial irregularities and illegal appointments in the bank, but rejected all the accusations.

In an exclusive interview with The Wire on September 23, former chief minister of J&K Dr Farooq Abdullah, today a member of parliament from Srinagar constituency, had said: “Today, you have the LG who is Hindu, the DG and the two IGs are Hindus. But during our time we had representation from both communities. When we were in power – be it my father, me, my son, Mufti Sahab or others – Hindus and Muslims were equally distributed in the bureaucracy. Today, that balance is not there. There is a total wipeout. Do you think only one community has the brains and the other community does not have any brains at all?”

Also read: Where Are the Jobs the Centre Promised J&K After Revoking Article 370?

Six months ago, social media in Kashmir trended a photograph released by the office of former J&K LG Girish Chandra Murmu. The photo depicted Murmu holding a meeting with a battery of bureaucrats. Of the 19 officials in the photo, there was just one local Muslim officer – Farooq Ahmad Lone, a former IAS officer. This photograph, according to Kashmiri social media users, showed that the Union government was deliberately making demographic changes in the predominantly Muslim Kashmir Valley.

Last week, senior BJP leader Muhammad Maqbool War even claimed that in coming days, all the posts in the UT’s civil and police administration would be held by BJP supporters. He made this claim in a party convention in the Sumbal area of North Kashmir’s Bandipora district.

However, Ashok Koul, the BJP’s general secretary in J&K, denied that his party had any plan to change the demography of J&K. “The LG of J&K has clearly said that he will bring good officers in the administration and there is no mention of Muslim or Hindu. Go and see – you will find Muslim commissioner secretaries in the administration,” said Koul.