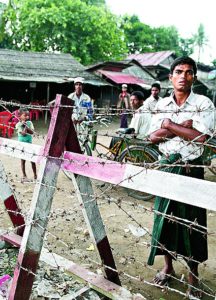 The political history of India over the last century and a half needs to be revisited because it is often assimilated in to the history of nationalism. The claim of the Indian National Congress to speak for the ‘nation’ or the raj’s subjects has always been contested by political rivals and critical historians, but here I am not concerned with the justice of the Congress’s claims as much as the inadequacy of the terms, ‘nationalism’ and ‘nationalist’, as a description of the anti-colonial struggle’s ideology, its practice and its achievement.

The Congress is a curious creature: an anti-colonial platform whose ideological positions bear no resemblance to standard historical descriptions or definitions of nationalism. The Indian republic that the Congress helped bring into being was, in its constitutional nature, unlike nation states elsewhere. Standard historical models of nation-state formation don’t begin to account for the establishment of the Indian republic as a gigantic, multi-lingual, formally secular and pluralist state.
A revisionist history could make the case for Indian exceptionalism. It might argue that the anti-colonial movement stewarded by the Congress and described as Indian nationalism, was, in fact, an ideological pluralism, the converse of the homogeneity, the oneness, the sameness that nearly every other sort of nationalism, ethnic or republican, saw as its justification. It would locate the historical origin of this genuinely weird nationalism in the complicated historical context of colonial rule. It would, in brief, show how historical context, strategic choices, accidents, improvisation and luck, helped create an unprecedentedly benign framework for State-building.

The subsequent history of republican India could be read in two ways: as an attempt to build a constitutionalist nation-state founded on this hard-won pluralism or as a losing battle where this project was eroded by the logic of a secondhand nationalism derived not from the experience of the anti-colonial struggle but the majoritarian logic of ethnic nationalism. Every post-colonial state in South Asia paid lip service to secular principle in the first decade of its existence before reconstituting itself as a kind of sole proprietorship run by its dominant community: Pakistan and Bangladesh became Islamic republics, Sri Lanka tried to turn itself into a Sinhala-Buddhist state and Burma marked its return to democracy by purging itself of Rohingya Muslims and writing Buddhist supremacy into law. Seventy years after Independence, India, South Asia’s behemoth, stands poised to inaugurate a Second Republic, made in the image of Savarkar’s Hindu rashtra.

The fascinating thing about majoritarian nationalisms in South Asia is their inter-connectedness, the shared rhetoric, the borrowed tropes. Buddhist nationalists in Sri Lanka and Myanmar, for example, network with each other, take their cues from each other when it comes to demonizing minorities and build their snarling nationalisms around the same political persona: the aggrieved majority tried beyond forbearance by predatory minorities.

Majoritarianism in South Asia should be understood as a conservative insurgency, a right-wing revolution that grows by designating dangerous minorities and devouring them. In Sri Lanka, the designated minority used to be the Tamils but their defeat has changed nothing; that country’s majoritarians have simply turned their attention from the Tamils to that island’s Muslims. Pakistan, an almost homogenously Muslim country, with minuscule religious minorities, has found Muslim minorities to prey upon. Despite having reduced its Hindu minority to single digits, Bangladesh remains a dangerous place for its Hindus, its tribals and its rationalists. Once Homo Majoritus reaches critical mass, the history of South Asia suggests that there is no going back.

There are lessons to be learnt from the histories of our South Asian neighbours. They are worth bearing in mind as events in Assam unfold. As the National Register of Citizens sorts the population there into real Indian citizens and illegal immigrants, we might want to think of a similar process in Myanmar’s Rakhine province in the years leading up to the landmark election of 2015.

Myanmar’s 2014 census was in part designed to exclude alien minorities, especially Bengali-speaking Muslims who called themselves Rohingyas, a designation that Myanmar’s civil-military regime refused to recognize. As a result, a third of Rakhine’s population went uncounted. The census was used to compile the new electoral rolls for the country’s 2015 elections. Besides purging Rohingyas from the democratic process, statelessness set the stage for their internment; this is how Rohingyas in the Rakhine went from being villagers and townspeople to being corralled aliens.

We know how that ended, with the violent purging of three-quarters of a million Rohingyas, an act of ethnic cleansing conducted by Myanmar’s security forces. Once a substantial population is formally excluded from citizenship, it becomes stateless. The State then feels the need to remove these illegal aliens from the circuits of normal life into internment camps, where they can be monitored till such time as the problem of their anomalous presence can be resolved. They are consigned to a political limbo that is inherently unstable. The line between stateless people and enemy aliens is a fuzzy boundary, easily crossed in times of political tension.
We should ask if the government of India and the government of Assam have decided what they will do with the residents of Assam excluded from the National Register of Citizens. Will they be interned like Rohingyas in Rakhine? We should be concerned when a serving army chief suggests that an Assamese political party is the direct beneficiary of a Pakistani and Chinese conspiracy to alter Assam’s demography. To be concerned about illegal immigration is reasonable; to suggest that such immigration is analogous to Nazi Germany’s settler colonialism by using the term, lebensraum, is plainly unwise.

Myanmar’s political parties, its Buddhist clergy, its army, have used the Rohingyas to define Myanmar as a Buddhist state. There are signs that the Bharatiya Janata Party is using the concern over illegal migration to formally introduce a religious test for refuge and citizenship. In 2016, the present government introduced the citizenship amendment bill, which would allow illegal migrants belonging to the Hindu, Sikh, Buddhist, Jain, Parsi or Christian religious communities coming from Afghanistan, Bangladesh or Pakistan to not be imprisoned or deported. It would also reduce the minimum years of residency in India from 11 to six years for such migrants. This amendment does not, however, extend to illegal Muslim migrants.

The defence of this formally discriminatory amendment is that these are Muslim majority countries and their religious minorities need protection in a way that their Muslim citizens do not. This is an untenable argument given that one of the principal targets of fundamentalist violence in Pakistan is that country’s Shia minority. By the terms of this proposed amendment, a Bangladeshi rationalist driven to seek safety in India by that country’s machete-wielding jihadists would be denied refuge if he happened to be a Muslim. This amendment should be recognized for what it is: the thin end of a majoritarian wedge whereby the republic will begin to exclude Muslims because they are Muslim at its borders. This is a bid to write discrimination into law by exploiting legitimate concerns about illegal migration, by manipulating the marches, as it were, to poison the mainstream.

The BJP’s Hindutva project will be won or lost at the ballot box but not only at the ballot box. Elections are also arguments and it is up to those opposed to Hindutva to make the case for a secular common sense in India. They need to show that it has in the past and can in the present underwrite a robust constitutional patriotism worth defending against the malignant chauvinism of the Right. This means pushing back against the logic of majoritarianism wherever it surfaces, as it has in Assam; the argument about Assam and citizenship is an argument about India.

The article appeared in The Telegraph www.telegraphindia.com on 25/2/2018