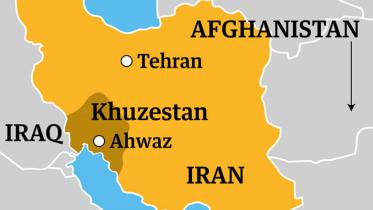 Protests have erupted in Iran’s oil-rich province of Khuzestan barely three months after the Islamic republic was rocked by mass anti-government demonstrations.

Sparked by anger at the depiction of the province’s community of Arab descent on an Iranian New Year show about the country’s diversity that was broadcast on state-run Iranian television, protesters demanded an apology by the broadcaster, Islamic Republic of Iran Broadcasting (IRIB).

The show featured dolls wearing traditional costumes to illustrate diverse Iran’s ethnic make-up. The dolls representing Iranian or Ahwaz Arabs were clad as Lurs, an ethnic group Iranians of Arab descent charge are encouraged to migrate to Khuzestan in a bid to change the province’s demography.

Ahwaz or Ahvaz is the way Khuzestan’s Arab population identifies itself and is the name of the capital of the south-eastern province that borders on Iraq and sits at the head of the Gulf.

“These programs and other racist practices are part of the policies adopted by the Iranian central government in its attempt to change the demographic structure by deporting indigenous Arab Ahvazi people from their land through policies of poverty, marginalization, exclusion, unemployment, and deprivation,” the Ahvaz Human Rights Organization said.

It said protesters dressed in traditional Arab garb chanted in Arabic and Persian “Ahwaz is ours ,we will never give it up.”

The protest, one of a string of protests over several years, prompted by long-standing charges of discrimination by the government that not only fuel marginalization but also environmental degradation in Khuzestan, comes against a backdrop of Iranian concerns that the United States and Saudi Arabia may pursue efforts to undermine or topple the regime in Tehran.

Iranian fears are fuelled by the possibility of Mr. Trump deciding in May to walk away from the 2015 international agreement that lifted crippling economic sanctions in exchange for curbs on the Islamic republic’s nuclear program; the nomination of Iran hardliners John Bolton as his national security advisor and Mike Pompeo as secretary of state; and Saudi Crown Prince Mohammed bin Salman’s increasingly tough language toward Iran.

Mr. Bolton called at a rally in Paris last July together with Prince Turki al-Faisal, a former Saudi intelligence chief whose remarks at times serve as trial balloons for Prince Mohammed, for regime change in Iran. The rally was organized by the Mujahedeen Khalq, MEK, or People’s Mujahedeen, an Iranian opposition group that supported Saddam Hussein in his war in the 1980s against Iran.

“The declared policy of the United States of America should be the overthrow of the mullah’s regime in Tehran. The behaviour and the objectives of the regime are not going to change and therefore the only solution is to change the regime itself. And that’s why before 2019, we here will celebrate in Tehran,” Mr. Bolton said referring to the Islamic revolution’s forthcoming 40th anniversary.

Speaking last week to an MEK Persian New Year’s gathering, former New York Mayor Rudi Giuliani predicted Mr. Bolton’s appointment before Mr. Trump announced it and assured the audience that “if anything, John Bolton has become more determined that there needs to be regime change in Iran, that the nuclear agreement needs to be burned, and that you need to be in charge of that country.”

Prince Mohammed started escalating his rhetoric two months earlier when he vowed that “we won’t wait for the battle to be in Saudi Arabia… Instead, we will work so that the battle is for them in Iran, not in Saudi Arabia.” The crown prince has since twice compared Iran’s Supreme Leader, Ayatollah Ali Khamenei, to Adolf Hitler, arguing that his ambitions for territorial expansion were similar to those of the Nazi leader.

In interviews during his ongoing three-week long charm offensive in the United States, Prince Mohammed warned that Saudi Arabia would develop nuclear weapons of its own if Iran reverted to a military program. He went on to suggest that Saudi Arabia could go to war with Iran in 10-15 years if the international community failed to halt Iranian expansionism.

Saudi Arabia and other Gulf Arabs have a long history of encouraging Iranian Arab opposition and troubling the minority’s relations with the government.

Unidentified gunmen in The Hague killed Ahwazi activist Ahmad Mola Nissi in November. Mr. Nissi was shot dead days before he was scheduled to launch a Saudi-funded television station staffed with Saudi-trained personnel that would target Khuzestan, according to Ahwazi activists.

Writing in 2012 in Asharq Al Awsat, a Saudi newspaper, Amal Al-Hazzani, an academic who has since been dropped from the paper’s roster after she wrote positively about Israel, asserted in an op-ed entitled “The oppressed Arab district of al-Ahwaz“ that Khuzestan “is an Arab territory… Its Arab residents have been facing continual repression ever since the Persian state assumed control of the region in 1925… It is imperative that the Arabs take up the al-Ahwaz cause, at least from the humanitarian perspective.”

For their part, Iranian Arabs believe that the government fears that they are susceptible to foreign Arab influence. That suspicion, Iranian Arabs say, is rooted in Iraqi leader Saddam Hussein’s bloody eight-year war against Iran that was funded by Saudi Arabia and other Gulf states.

Saddam falsely expected that Iranian Arabs would welcome the opportunity to gain independence from Iran. The Iranian Arab refusal to side with Saddam failed, however, to earn Iranian Arabs the credit they deserved.

Iranian fears that external powers could exploit discontent among Iranian ethnic minorities, who account for almost half of the Islamic republic’s population, have been further fuelled by indications that some in Washington and Riyadh may be toying with the notion of trying to destabilize the country by supporting disaffected groups.

Iran’s Intelligence Ministry said in January that it had seized Saudi-supplied caches of weapons and explosives in separate operations in Kurdish areas in the west of the country and a Baloch region on the eastern border with Pakistan.

A study published last year by a Riyadh-based think tank, believed to be supported by Prince Mohammed, laid out a plan to support a Baloch insurgency in the Iranian province of Sistan-Baluchistan that borders on the Pakistani province of Balochistan. Saudi Arabia has long supported ultra-conservative religious seminaries in Balochistan that dominate the Pakistani region’s education landscape.

There is no indication that this week’s protests in Khuzestan were anything more than an expression of popular anger against perceived denial of an Iranian Arab identity. By the same token, external forces that view Iranian ethnic groups as a monkey wrench for regime change will no doubt see them as signalling opportunity.