Anti-social network In Myanmar, Facebook struggles with a deluge of disinformation 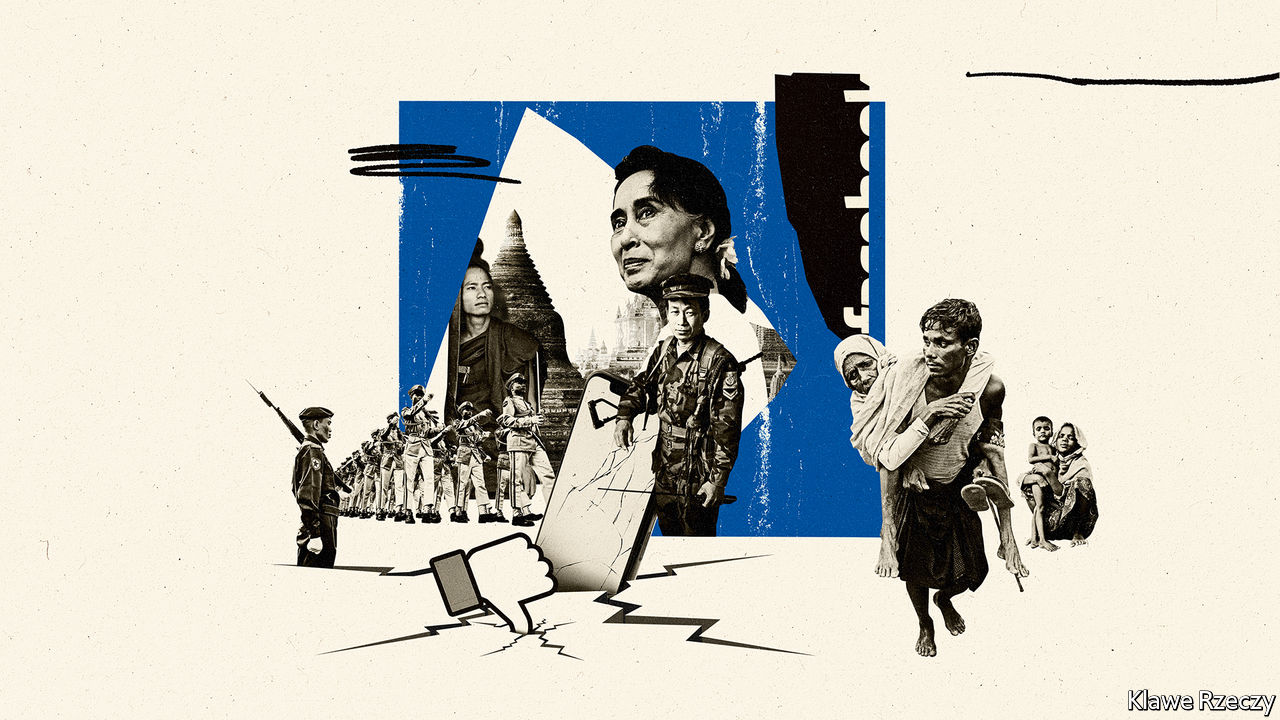 Mg mg kyaw can still remember the day he got his first mobile phone. It was 2012, and Myanmar was emerging from decades under the heel of a military junta. In a country where gdp per person was $1,000, sim cards, which sold for as much as $2,000, were like gold dust. Only North Korea had fewer mobile phones per person.

When a civilian government took power a decade ago, it ended pre-publication censorship and liberalised telecommunications. Mr Mg Mg Kyaw applied to the government to purchase a sim card, then in limited supply. He won the “lucky draw”, as he puts it, and shelled out 500,000 kyat ($387) for the chip. When he took his new phone to the university where he was a student, he was thronged by curious friends. “I felt like a star,” he says.

Facebook was already installed on Mr Mg Mg Kyaw’s phone when he bought it. As the price of a sim card plunged, to as low as $1.50 by 2014, and the number of cards relative to the population skyrocketed, from 2% in 2011 to 126% in 2020, Facebook stepped up its effort to get onto Burmese smartphones. In 2016 it rolled out its “Free Basics” program, which gives users who sign up for a Facebook account free access to a limited number of pre-selected websites. With Free Basics, Facebook hoped to conquer much of the developing world. In Myanmar, the tactic worked.

The platform now has 27m users in Myanmar, equivalent to half of the population. This is no big feat in South-East Asia, where there are roughly two Facebook accounts for every three people. Yet the company has captured 99.4% of the Burmese social-media market, according to StatCounter, a market-analysis company. When Ronan Lee of Queen Mary University of London conducted field work in Myanmar, “it was common to find mobile-phone users who did not understand that the Internet existed beyond what was available to them” through the site, he writes. Even Burmese slang reflects the fact that in Myanmar, Facebook is the internet. The word for “going online”, line paw tat tal, is synonymous with “active on Facebook”.

Getting a phone was “exciting”, says Mr Mg Mg Kyaw, now a 27-year-old customer-service agent, especially as data became more affordable. Now he spends about ten hours a day on the internet, he reckons, much of it on Facebook, talking to other users about politics and the military. “People in Myanmar were silenced [by the junta] for so long,” says Christina Fink, a cultural anthropologist at George Washington University in Washington. They have “revelled” in being able to express themselves on Facebook, she says.

But there is a dark side to this freedom. Since 2012, a Buddhist nationalist movement has created a virtual community on Facebook bound together by its fear of Muslims. According to the un, in 2017 there were more than 150 highly influential Facebook accounts, pages and groups that regularly preached hate against Muslims and the Rohingya, a Muslim ethnic minority in the western state of Rakhine. That same year the Burmese army and mobs of Buddhist Rakhines, another ethnic minority, attacked Rohingya villages, sparking the exodus of some 725,000 Rohingyas to neighbouring Bangladesh. un experts investigating the pogrom determined that Facebook had been “a useful instrument for those seeking to spread hate”.

As the country gears up for an election on November 8th, independent social-media monitors have recorded growing volumes of hate speech and disinformation—such as claims that Aung San Suu Kyi, Myanmar’s de facto leader, has died of covid. On October 8th Facebook announced that it had removed a popular network of accounts it says were run by the army, which promoted the view that the Rohingya do not belong in Myanmar.

But supporters of the National League for Democracy, the party of Ms Suu Kyi, are also targeting Muslims and pushing falsehoods in an effort to convince ethnic minorities to vote for their party, according to Myat Thu of Myanmar Tech Accountability, a monitoring firm. The targets of bigotry now encompass anyone who is not “pure Bamar”, the ethnic majority, says another analyst who monitors Burmese social media, and asked not to be named.

Facebook is the primary source of news for two out of five Burmese users. They are highly susceptible to manipulation online for several reasons, explains Ms Fink. Critical thinking is absent from school curricula, depriving pupils of the skills necessary to distinguish fact from fiction. Myanmar is a hierarchical society, and divisive posts are often written by powerful figures, from senior monks to generals. Islamophobia also taps into an anxiety, unleashed by the opening up of the economy, that Muslims will enrich themselves at the expense of others. That fear harks back to Myanmar’s past as a British colony, when hundreds of thousands of Indians migrated to Burma, as it was known, and often prospered there.

Facebook argues that it is better equipped to deal with abusers than it was a few years ago (see Briefing). It has banned some generals and monks from the platform, and its “integrity systems”—a mix of artificial intelligence (ai) and human monitors—scrub content that violates its policies, according to Rafael Frankel, Facebook’s director of public policy. For the duration of the election campaign, Facebook has expanded its hate-speech policy to include attacks on religion: users may no longer say, for instance, that they hate Islam, something that was previously allowed. Misinformation that might undermine confidence in the polls is also banned. “As a result we’re basically at near-historic lows for hate speech on the platform in Myanmar,” says Mr Frankel.

Its monitors are certainly hard at work. They removed 280,000 pieces of content in the second quarter of this year, more than five times what they took down the previous quarter. Yet much may be slipping through the net. The platform aims to wipe prohibited content within 24 hours—but a post does not need to be up for long to be seen by hundreds of thousands of users. Moreover, Facebook’s ai reviews only Burmese content; it has not been trained in any of the country’s ethnic-minority languages, spoken by a third of the population. But at least the site is trying. The government makes little effort to curb incitement to violence against minorities, nor to promote the idea that Myanmar belongs to everyone who lives there. ■