An unanticipated note by Nasheed: Imprisonment of rival Yameen alone is not justice 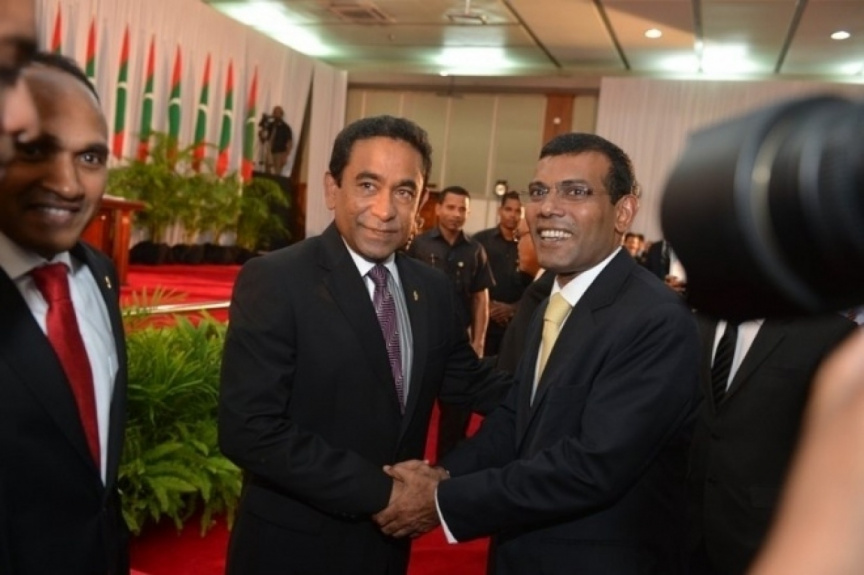 Speaker of the Parliament Mohamed Nasheed has stated that the imprisonment of former President Abdulla Yameen alone is not just.

Nasheed and the former President Yameen are seen as staunch political rivals. Yameen was jailed after being found guilty of money laundering in trail described as a sham by the opposition.

The handwritten statement by Nasheed was shared on a Whatsapp group of the governing MDP.

Nasheed, who is also a former President, in the statement, said that he did not support the ideology nor the actions of Yameen. He said that the imprisonment of “just Yameen” for the MMPRC scandal was something “he saw as justice”.

“We said that we will investigate the crimes of treachery in the previous administration. There is no reason why we should hesitate in doing so.” Read the statement by Nasheed.

The short note by Nasheed ended by saying that “just as so, we have to do what we said with the Commission on Deaths (DDCOM).”

ShathS #StayHome #SocialDistancing@AmnaShath·16hRaees @MohamedNasheed always stood up for whats right, even if it’s him against the world

Hello everyone , reason why RN Retweeted Saeed and Shiyam’s tweet is here

Happy Friday ya all

Nasheed’s short address to his supporters comes after he retweeted opposition senior figure’s messages congratulating Yameen on his birthday. The retweets had garnered the attention of many and was seen as a surprise move by the Speaker who has been critical of the governing administration which he is a part of.

Only the former President Yameen has been found guilty of taking part in the massive MMPRC scandal of MVR 3.2 billion. He was charged with laundering USD one million into his account. He was sentenced to five years in prison after being found guilty.

The case is now on appeal at the High Court. However, no proceedings on the case have been made so far.

Investigating the scandal surrounding state financials and the deaths and disappearances of a number of figures were one of the major pledges made by the current administration during the election campaign. Two independent commissions were formed to investigate the separate affairs. Not much has been seen in terms of results from both Commissions so far.

Nasheed had vacated the Presidency on February 7, 2012 after coming to power in 2009. The events that led to his decision to vacate power started off as a peaceful protest at the end of 2011, which eventually led to turmoil. Nasheed had maintained that he was ousted out of power by a “coup”. Yameen was seen as a senior member of the opposition at the time.

This is the first time Nasheed has uttered words in defense of his political rival.

Yameen had won the election in 2013 after edging out Nasheed who also contested the election. Nasheed was later jailed during the administration of President Yameen for terrorism charges.

The 13-year prison sentence handed down to him was also described as politically motivated. The sentence had also kept Nasheed from contesting in the 2018 presidential elections. The Supreme Court of Maldives had later overruled the sentence.

President Yameen was defeated in the election in 2018 by a coalition spearheaded by the Speaker Nasheed.