Afghanistan has handed “undeniable” evidence to Pakistan that it claims shows a recent spate of deadly attacks were planned on Pakistani soil, Afghan officials said on Thursday, amid growing public anger over their impotence to protect civilians.

Mohammad Masoom Stanekzai, the head of Afghanistan’s spy agency, told reporters it was clear that the attacks were “planned from across the border”.

“We asked Pakistan to hand over the culprits of the attacks in Afghanistan and we shared undeniable evidence that the attacks were planned there,” Stanekzai said, a day after meeting with top Pakistani officials in Islamabad.

Examine: 3 attacks in 7 days — is the US security strategy in Afghanistan working?

Afghan Interior Minister Wais Barmak said the Afghans submitted a list of questions during Wednesday’s “constructive” one-hour meeting, asking among other things what action Pakistan will take against Taliban leaders and alleged training centres on their soil.

Reuters quoted Afghan officials as saying that Pakistan had agreed to take “practical steps” to act on the information, but the Pakistani embassy in Kabul said the information provided by Stanekzai was “being examined for its authenticity”.

“Pakistan has not given any commitment to give reply to the information received from the NDS Chief Mohammad Masoom Stanekzai, during his trip to Islamabad, yesterday,” Tolo news quoted the embassy statement saying.

Nearly 200 people have been killed over the past month in attacks claimed by the Taliban and a militant Islamic State (IS) group affiliate. Afghan authorities say they detained one of the gunmen who attacked a military academy on Monday, killing 11 people in an assault claimed by IS.

“The Taliban, with these actions, cannot call themselves a political organisation,” Stanekzai said. “They are a terrorist organisation.”

“We expect action, not just talk,” he added.

The Afghan officials said some of the latest evidence came from confessions by captured militants. They said they told the Pakistani side that some of the militants had been trained at madressahs in Balochistan’s Chaman area.

Earlier in the week, Afghanistan’s UN envoy Mahmoud Saikal tweeted that the father of one of the insurgents involved in the bloody January 20 assault on Kabul’s Intercontinental Hotel “conceded his son was trained in Chaman”.

“We have all options on the table to secure the national interests of Afghanistan,” Stanekzai said, without elaborating.

Meanwhile in Kabul anger is growing after attacks, with many people taking to social media to express their grief and rage.

A number of small protests were held on Thursday, including outside the Pakistani embassy, but few people turned out as the city remains on high alert for further assaults.

Kabul, along with Washington, has long accused Islamabad of providing safe havens to leaders of the Taliban and other militant groups. Pakistan denies the charges, insisting it has eradicated safe havens in the tribal region along the border with Afghanistan.

US President Donald Trump has ratcheted up the pressure on Pakistan in 2018 with the aid freeze.

Meanwhile, Foreign Secretary Tehmina Janjua is due to lead a delegation to Kabul on Saturday (Feb 3) for bilateral talks. But the Foreign Office (FO) has said her visit is not linked to the Afghan delegation’s trip and had been scheduled long before.

The FO had revealed earlier this week that Pakistan handed over 27 individuals suspected of having ties to the Afghan Taliban and Haqqani Network to Afghanistan last year. But independent Afghan news agency Pajhwok quoted Barmark, the Afghan interior minister, as claiming that the suspects handed over by Pakistan were not Haqqani militants but “common Afghan refugees”. 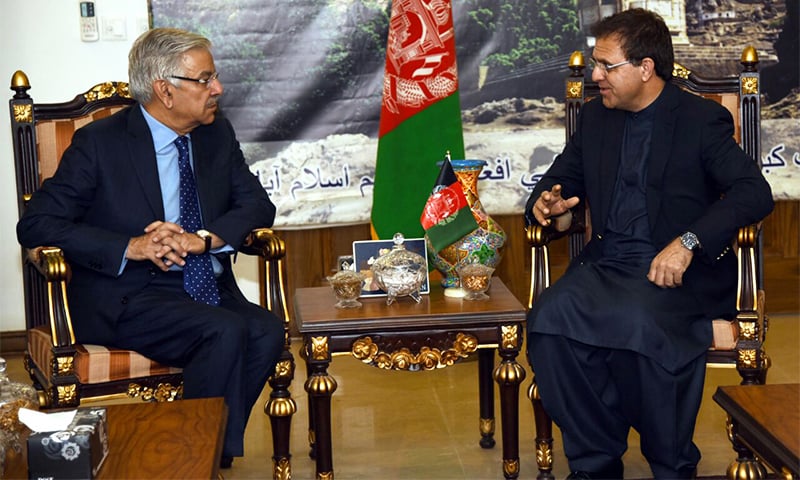 Asif signed the condolence book at the embassy and offered fateha for the lives lost in the attacks.

Speaking on the occasion, the foreign minister said Pakistan “strongly condemns terrorism in all forms and manifestations”. He said both Afghanistan and Pakistan were victims of terrorism and highlighted the need for close cooperation between the two countries to fight this common threat.

Asif said it was encouraging that a high-level Afghan delegation which visited Islamabad yesterday had “productive talks” with Pakistani officials and “it was agreed to work together to strengthen mutual trust and bilateral engagement”.

According to the press release, Afghan Ambassador to Pakistan Omar Zakhilwal thanked the foreign minister for his condolences and reiterated the need for strengthening bilateral engagement.

The cooperation should be focused on “upholding our mutual commitment for not letting use of our respective soils against each other”, he was quoted as saying.