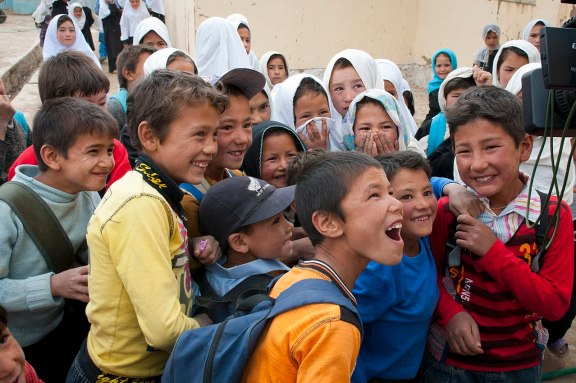 A group of school children react to seeing themselves on the small screen of a video camera at the Bamyan Regional High School June 6, 2012. (Photo ID: 607641). Image credit: Wikipedia

This paper will cover how, despite facing persecution and violence, the Hazara have tried to construct a peaceful struggle through their nonviolent protests. It has helped the community get its message across on both national and global level, has opened doors for short-term healing, but the persecution continues unabated.

‘They asked who the Sunnis were, asking for names. Then they told the Sunnis to run. We jumped and ran for our lives. But while they allowed everybody who was not a Shia to get away, they made sure that the Shias stayed on the bus. Then they made them get out and opened fire’. —Haji Khushal Khan, bus driver, Baluchistan, December 2011, Quetta

On September 20, 2011, few gunmen stopped a bus of pilgrims near the town of Mastung. The bus was carrying 40 Shia Muslims of Hazara community coming from the border of Iran after performing the pilgrimage of Holy sites in Iraq and Iran. The Shia passengers were singled out by gunmen after checking their ID cards and the Sunnis were asked to go.[i] After killing 26 of Shias, including women and children and wounding 6, another group of terrorists killed three Hazara boys the same day, who tried to help the injured by taking them to the hospital for the treatment. The responsibility of the attack and killings was claimed by Lashkar e Jhangvi, a Sunni militant group. Later on, the terrorists conducted several more executions of Shias after separating them from Sunnis in the following years[ii].

Hazara, who are believed to be the descendants of Turko-Mongolian origin partake a history of racial discrimination and violence due to their Athna Ashri (Shiite) faith. Largely following Shia sect of Islam, Hazara also has minority which consists of Ismailia and Sunnis. They contribute to 20 to 25% of the population of Afghanistan and are one of the largest ethnic minority groups, which is concentrated in the central region of Afghanistan known as ‘hazarajaat’ and in Baluchistan, province of Pakistan. The inherent language of Hazara is Dari (Persian) called Hazaragi, which is also called Indo-European language that derives 10% of the words from foreign languages.[iii] The Hazara community that was well known for its poetry, rich culture and literature and academic excellence has now been condensed to an ethnic and sectarian minority.

The history of violence and settlement in Baluchistan

During the years 1890 to 1900, Hazara faced an extreme form of oppression, abuse, forced migration and coercion by the hand of Emir Abdul Rahman Khan, a Pashtoon King, and lost a great deal of land in the central region of Afghanistan, a widespread geographical land belonged to Hazara. Easily distinguishable among others due to their facial features, they have always remained an easy target. Many times, in the history they have been declared as infidels by Sunni religious scholars, which made it easy for many leaders kept coming into the power to coercively take over the fertile land from this suppressed community[iv]. The leaders rising from the Sunni majority of Afghanistan, have also used authority to abuse and torture Hazara by depriving them of their fundamental human rights, the freedom to practice religion and get dignified positions in workplaces.

After Mazar-e-sharif, a Hazara majority city in Afghanistan was captured by the Taliban in 1998, it was the time when the Taliban went door to door to find Hazara and brutally killed them. The massacre resulted in the loss of life of more than 2000 people.[v] According to Human Rights Watch, it was “one of the single worst examples of killings of civilians in Afghanistan’s twenty-year war.” [vi]

Before the origin of the Taliban, the Government backed forces in Afghanistan supported the militant groups which remained actively involved in the systematic killings of Hazara.[vii] Due to the result, there was an acute rise in more migrations and political and military resistance. At the beginning of 1999, the Taliban forces entered the Hazarajaat and captured most of the land including the city of Bamiyan, Yakaw eLand and Dar e Souf. Approximately 50,000 people were displaced after fleeing these towns due to violence. [viii]

The perpetual state of oppression and persecution followed Hazaras wherever they went. The next part of this study will focus on their settlement in Baluchistan, one of (the largest province of Pakistan, which shares the border with Afghanistan).

According to William Maley, Professor of Diplomacy at the Australian National University, “Hazara ‘tend to be the first people victimized when the situation gets rough … while Hazaras tend to be a fairly harmless group in the community in which they’re based, to extremists their very existence can be an affront.’’[ix]

Pakistan, the birthplace of Taliban, is perhaps more unsafe for Shia than Afghanistan. According to the UN, the Islamist groups working under the patronage of Taliban have killed more than 1500 Hazara Shias alone in Pakistan in the past decade.[x] The deadliest of all attacks were launched in the year 2013 when in January more than 120 people, and in February more than 180 people were killed.

The inimitable nonviolent resistance by Hazara in Pakistan can be divided into three aspects. The first aspect is how they have disarmed themselves and pushed their energies into a silent and nonviolent form of highly organised and disciplined protests and sit-ins. The second important aspect of their strategy is the youth that went abroad on asylum actively engaged in the social media and political activism highlighting the plight of  Hazara globally. While lastly, increased focus on education of Hazara youth by the community leadership, so to empower and enable them to regain their rightful place in the society. But due to lack of political representation, they still face relentless persecution.

An art student from the Quetta Sketch Club recounted:

‘You can only practice religious Rights of burial, as ordained by Sharia when conditions are normal. The sharia does not apply in abnormal conditions. In such conditions, it is most important to undertake the series of actions whereby conditions can be normalized.[xi]

On the 10th of January 2013, more than 180 people lost their lives after a suicide attack jolted Alamdar Road, Hazara town of Quetta. In the words of the student mentioned in Ayesha Omer’s article, the systematic killing of an ethno-sectarian group is an ‘abnormal condition’ on which shariah is not applicable.[xii] The members of Hazara community sat in sub zero temperatures for three days with the dead bodies of their loved ones, refusing to bury them, was probably one of the most powerful displays of protest against violence in recent memory.[xiii] But even such powerful protest could not be channelised into a proper movement for justice.

In 2012, which saw a series of attacks, thousands of people from Hazara community came out and chanted slogans against the local government and law enforcement agencies role in the clampdown on terrorist groups who systematically targeted the approximately 600,000 strong Hazara minority of Quetta.[xiv]

The placards that read ‘Stop Hazara Killings’, ‘Say No to Terrorism’, ‘No to Sectarianism’, and ‘We Want Peace’, could be seen everywhere. After these attacks, approximately 4000 people peacefully walked towards Governor house in Baluchistan. [xv]

The protests and sit-ins at Alamdar Road have always seen an active participation of women, children and elderly men of Hazara Tribe which shows that the people of Hazara are hopeful for a peaceful Baluchistan and a nonviolent Pakistan which will one day give them their right to live.[xvi]

Many civil society activists and politicians are often seen posting condemnations on the killings of Hazaras, including Jibran Nasir and Shireen Mazari.[xvii] The social media users globally build pressure on mainstream media to report on the plight of this persecuted community, for whom suffering in silence has become a norm.

An Afghan scholar, Amin Saikal has stated the two major reasons for Hazaras turning into a stronger community even though they endured and suffered worst form of brutalities in their history and today. The first, he says is the bitter experiences they faced in history which has taught them to “remain vigilant of changing situations and take advantage of every opportunity in order to maintain and strengthen their viability as one people”[xviii]. The second he argues is the emergence of civil society facilitated by the leadership of Hazara, smoothing path and creating opportunities for the youth to promote their rights and interests through Social Media forums. [xix] However, without the mobilization of movement towards participation in electoral politics, the activism leaves a short-term impact.

Education as a mean of resistance

Education as the means of resistance has long been employed by Hazara against the discrimination they have faced in name of religion and ethnicity[xx].

During the 1900s, when Hazara was suffering by the hands of Pashtoon, many Hazara moved to Iraq, Iran, and Syria in quest of education and excelled in Religious education.[xxi]

The Hazara Scholars have been actively involved in engaging the community towards equipping themselves with education and sending their children, both boys, and girls, to schools considering it a high form of investment in the future of the community.[xxii] They believe that education teaches humanity, democracy, enlightened understanding of the faith and power to resist without being violent. [xxiii] It is noticed that even though the community has produced several intellectuals, there is still a dearth of leadership and guidance. Dispersed protests, sudden emotional outburst fizzles out soon because the movement lacks strong organization and unified platform.

This includes a current visit of COAS to Quetta on the call of Hunger strike till death by Advocate Jalila Haider, a Hazara and a human rights activist. The strike ended in a meeting with General Qamar Bajwa, where demands were heard to provide Hazara a state security and right to live. However, the question remains that would this show any results? The community still needs to work on the reinforcement of forming broader alliances with other political groups and make an effort to acquire political representation in the parliament.

Even though the two decades of violence against Hazara is met with, and resisted through, nonviolent, steadfast and courageous movement, the strategies employed by Hazara were not enough to end their persecution. The non-violent resistance might have helped them get across their message of being a peace-loving community, but the killings are still on the rise. As reported by Dawn, in the year 2011 fifty-six Hazara were killed, in 2012 the number raised to fifty-eight people and 2013 and 2014 being the deadliest years for Hazara community saw the killings of up to 300 people in various suicide and target killing incidents.[xxiv] According to a report released by (NCHR), The National Commission of Human Rights (2018), 509 people of Hazara Community have been killed in the last five years.[xxv]

Watch, copyright Human Rights. 2014. “We are the walking Dead.” 75. [https://www.hrw.org/sites/default/files/reports/pakistan0614_ForUplaod.pdf].

Watch, copyright Human Rights. 2014. “We are the walking Dead.” 75. [https://www.hrw.org/sites/default/files/reports/pakistan0614_ForUplaod.pdf].

[iii] World Hazara Council: ‘Who are the Hazara?”, http://worldhazaracouncil.org/en/who-are-the-hazaras/